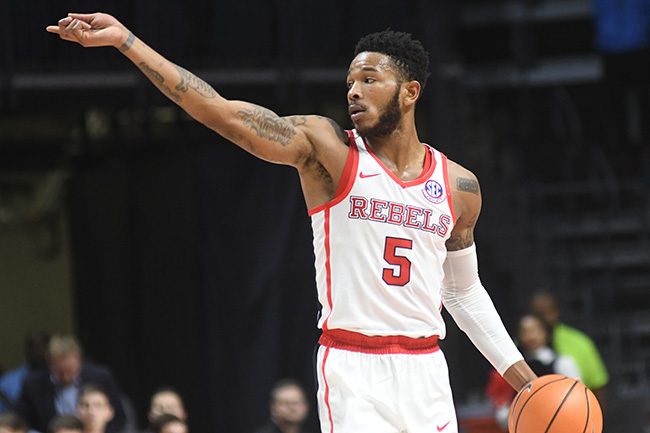 Ole Miss' Markel Crawford (5) vs. North Alabama in an exhibition game at the Pavilion at Ole Miss, in Oxford, Miss. on Sunday, November 5, 2017. (Bruce Newman, Oxford Eagle via AP)

Ole Miss guard Markel Crawford has been cleared by compliance and will play in the Rebels’ season opener tonight against Louisiana, athletic director Ross Bjork said.

Crawford on Tuesday was named in a story published by CBSSports.com as a player that allegedly received hundreds of dollars worth in impermissible benefits by a friend of former Memphis coach Josh Pastner while Crawford was still playing for the Tigers. Crawford transferred to Ole Miss in the spring and has one year of eligibility left.

Ole Miss coach Andy Kennedy said Tuesday the program went through protocol after finding out about the report, which included turning it over to the school’s compliance department. But Crawford’s status with the team never changed.

“I’ve been told it’s business as usual,” Kennedy said then. “He’ll be at practice (Tuesday) and will practice. I’m not going to change anything unless I’m told otherwise.”

Crawford, a projected starter for the Rebels, averaged more than 12 points a game at Memphis last season. Tonight’s opener will tip at 7 from The Pavilion.