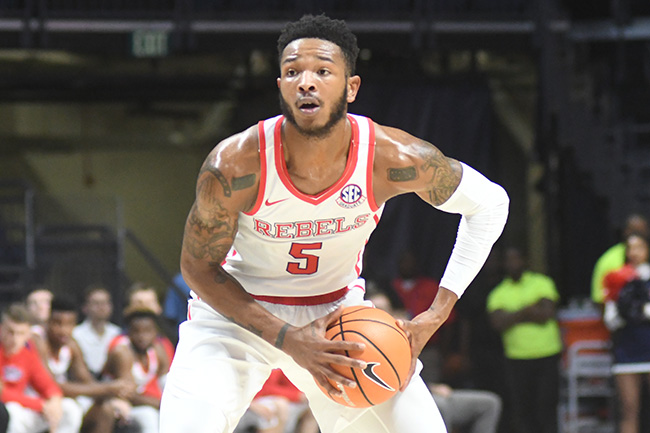 Ole Miss' Markel Crawford (5) vs. North Alabama in an exhibition game at the Pavilion at Ole Miss, in Oxford, Miss. on Sunday, November 5, 2017. (Bruce Newman, Oxford Eagle via AP)

Markel Crawford could find himself in hot water with the NCAA after a friend of former Memphis coach Josh Pastner claims to have given Ole Miss’ senior guard hundreds of dollars worth of impermissible benefits, but Ole Miss coach Andy Kennedy said nothing has changed with Crawford’s status as of now.

Ron Bell, a longtime friend of Pastner, who now coaches at Georgia Tech, told CBSSports.com in an article published Tuesday he supplied Crawford with approximately $300 in gift cards for groceries and gave him a pair of sneakers totaling $117.99 while at Memphis. Crawford, who came to Ole Miss in the spring as a graduate transfer and has one season of eligibility remaining, played the 2015-16 season under Pastner before Pastner took the job at Georgia Tech, which announced last week it was suspending Josh Okogie and Tadric Jackson after the players received hundreds of dollars in extra benefits — benefits Bell told CBS Sports he provided.

CBS Sports also reported that Bell provided documentation of two plane tickets he bought for Crawford and his brother when Crawford announced he was transferring from Memphis but were never used once Crawford signed with Ole Miss in April.

In a statement, Ole Miss said it was aware of the report and was “gathering facts on the matter.” Kennedy said he’s been given no reason to withhold Crawford from any team activities as of Tuesday afternoon.

“I found out about it probably the same time you guys did today,” Kennedy said. “Immediately we go through protocol, which is to turn it over to our compliance and let them do what they do. I’ve been told it’s business as usual. He’ll be at practice today and will practice. I’m not going to change anything unless I’m told otherwise.”

The 6-foot-5 Crawford is expected to start on the wing for the Rebels, who open their season Friday at The Pavilion against Louisiana at 7 p.m. He averaged 12.8 points and 4.4 rebounds last season at Memphis and had nine points, four assists and three rebounds in 18 minutes in Ole Miss’ exhibition win over North Alabama.