Ole Miss vs. Louisiana-Lafayette live updates, score: Rebels get back to .500 in rout of Louisiana 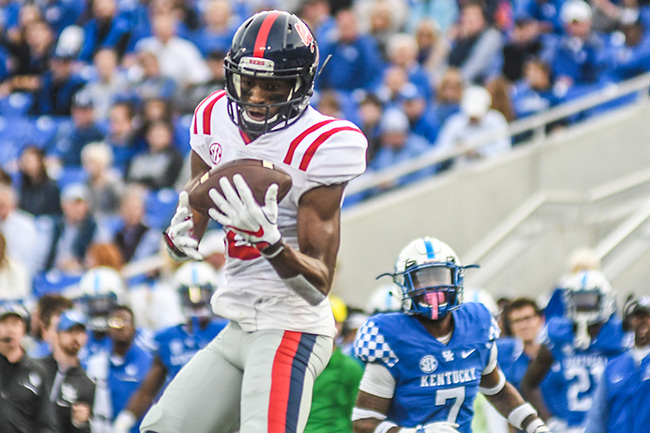 Jordan Ta’amu with his first interception in the last eight quarters when Chaiziere Malbrue picks him off. Louisiana then scores off a Davis 31-yard run. The extra point is again missed. Ole Miss 42, Louisiana 22 11:42 fourth quarter

Jordan Davis finds the end zone with a 10-yard run and Louisiana gets back on the board. The Cajuns miss the extra point. Ole Miss 42, Louisiana 16 13:46 fourth quarter

Louisiana gets deep into Rebel territory but come away with zero points for their effort. Stevie Artigue misses a 28-yard field goal. OleMiss 35, Louisiana 10 11:30 third quarter

The streak of touchdown drives ends at five as Ole Miss sends out Will Gleeson to punt for the first time today. Ta’amu was sacked twice on the drive as offensive line blocking was an issue that series. Ole Miss 35, Louisiana 10 :53 second quarter

Louisiana has their second-best drive of the game. This one results in a 43-yard field goal by Stevie Artigue. Ole Miss 35, Louisiana 10 4:45 second quarter

Ole Miss shooting a perfect 1.000 percent as they have scored five touchdowns on five drives to begin the game. Jordan Ta’amu rushes for one yard for the score. Ta’amu has five touchdowns — three passing, two rushing — and the Rebels are cruising. Ole Miss 35, Louisiana 7 7:56 second quarter

Louisiana avoids the shutout as running back Raymond Calais breaks though the defense for a 31-yard touchdown run. Ole Miss 28, Louisiana 7 11:13 second quarter

The streak of five-play drives ended as Ole Miss needed two more to find the end zone. Ta’amu hits Brown with a beautiful pass to the back right corner. Ta’amu now has 199 yards and three touchdowns through the air in a little over a quarter of play. Ole Miss 28, Louisiana 0 12:59 second quarter

Jordan Ta’amu goes eight yards on the keeper for the score. It was another five-play drive for Ole Miss. Rebels are averaging 15.7 yards per play. Ole Miss 21, Louisiana 0 3:46 first quarter

Another five-play drive for Ole Miss results in points. The Rebels march 95 yards and score off a 31-yard touchdown catch by A.J. Brown. During the drive Louisiana’s Jacques Boudreaux was ejected for targeting. Ole Miss 14, Louisiana 0 8:53 first quarter

Louisiana moved the ball past midfield but the drive stalled. The Cajuns punt and pin Ole Miss inside their own five yard line. Ole Miss 7, Louisiana 0 10:18 first quarter

Ole Miss will step out of conference play today at Vaught-Hemingway Stadium to take on Louisiana-Lafayette.

The Rebels, fresh off a dramatic 37-34 win at Kentucky, are going for just their second winning streak of the season and a chance to get back to .500 overall. Louisiana-Lafayette (4-4) beat South Alabama — a team Ole Miss (4-5) has also beaten this season — 19-14 last week. It will be the third career start for Ole Miss quarterback Jordan Ta’amu while the Ragin’ Cajuns will be starting true freshman Levi Lewis for the second straight week.

Kickoff is set for 11 a.m. Check back here for live updates throughout the game.