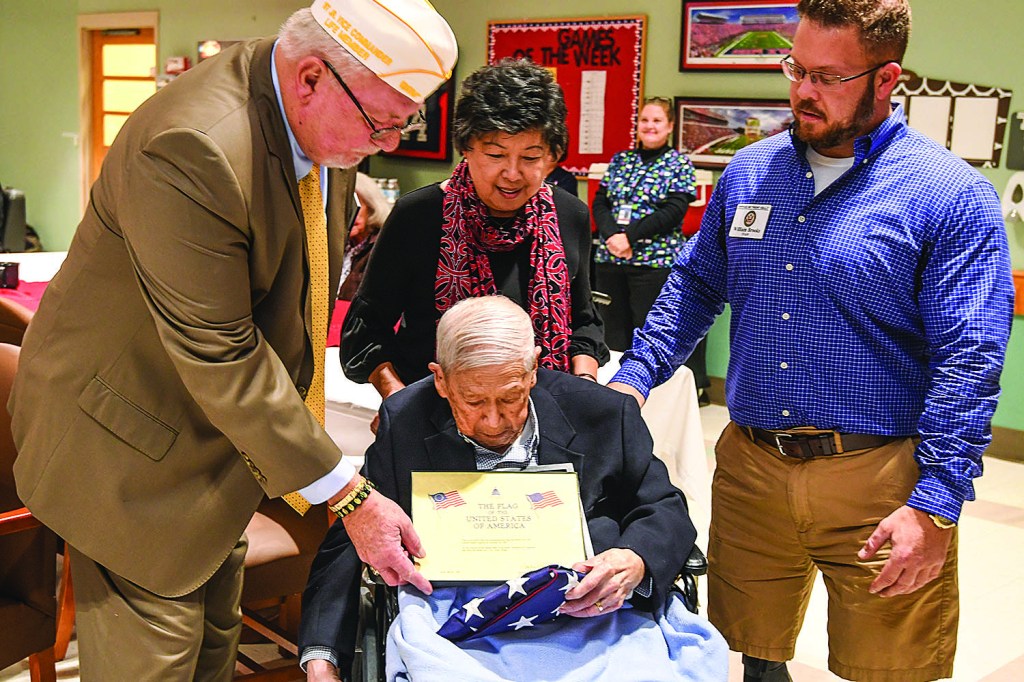 Linn "Pap" Pang, sitting, with from left, Jerry Bratton, Sally Chow, and William Brooks, receives a U.S. flag that has flown above the U.S. Capitol, at the Mississippi State Veterans Home in Oxford, Miss. on Monday, November 20, 2017.

Two veterans were the recipients of an honor on Monday that recognized both their service to their country and recent birthdays.

World War II veterans Linn Pang and Norman Clark were each presented with a flag that had been flown over the U.S. Capitol in Washington D.C., along with a plaque that commemorated the request from  Mississippi Congressman Trent Kelly to Congress to raise the flags in the honor of both veterans.

“We wanted to do something for these men,” Jerry Bratton, Commander of the Oxford chapter of the Disabled Veteran’s Association, said. “I contacted Representative Kelly’s office and they set it up for us.”

William Brooks, the Veterans Outreach coordinator for Rep. Kelly’s office, presented the flags and plaques to Clark and Pang during the ceremony for Rep. Kelly, who was unable to attend as he is touring military facilities in Europe and visiting troops for Thanksgiving. 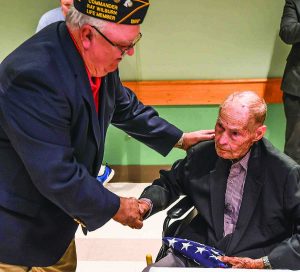 Ray Wilburn, left, presents a U.S. flag that has flown above the U.S. Capitol to veteran Norman Clark, at the Mississippi State Veterans Home on Monday. (Photo/Bruce Newman)

“These are two men who helped saved the free world,” Brooks said. “It’s an absolute honor for me as an Iraq veteran to be able to present this to two World War II veterans. They are giants to me.”

The event was held in conjunction with a Thanksgiving dinner for veterans and their families, all who were on hand to watch Pang and Clark receive their flags.

“It’s an honor really just to meet these gentlemen. These guys are terrific if you sit down and talk to them all you’ll need is a couple of minutes and you’ll be sold too. We only have about 6,000 World War II veterans left in the state and if it weren’t for these guys we wouldn’t be here tonight and be able to do this,” Bratton said.