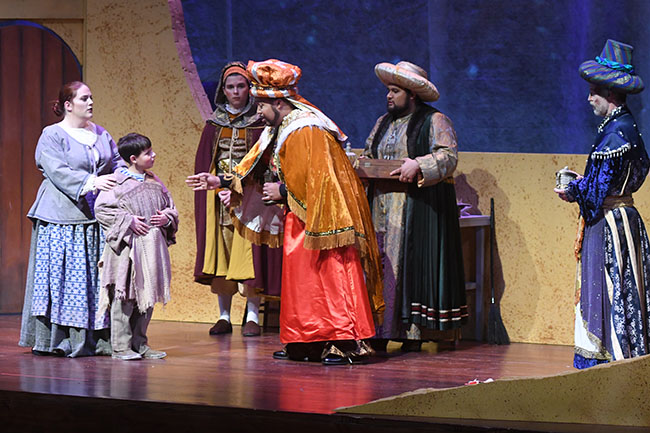 Caitlin Richardson, from left, as The Mother; Nicholas Scott as Amahl; Lawson Marchetti as The Page; Paul Gamble as King Balthazar; Sergio Vergara as King Melchior; and Jos Milton as King Kaspar rehearse for Amahl and the Night Visitors at the Ford Center on Wednesday. (Photo/Bruce Newman)

It’s a pair of firsts for the Gertrude C. Ford Center for the Performing Arts.

Friday will mark the culmination of the Center’s first large-scale production produced entirely by the Ford Center, Amahl and the Night Visitors. The opera — which is the most performed opera in the world with an estimated 500 performances every December — is a first-time production on the Ford Center stage.

“I’ve wanted to do ‘Amahl’ here for 23 years,” said Julia Aubrey, Director of the Ford Center as well as the director for ‘Amahl.’ “We were given a grant from Nancye Starnes and The Kite Foundation to do four productions, and this is one of them.”

The Ford Center has traditionally been a presenter, bringing in international productions and national tours of Broadway shows and other forms of music and theatre, Aubrey said.

With the grant, the Center will now become a producer, creating their own works and working together with the University of Mississippi on various productions.

“This show really is a combination of a lot of people coming together,” Aubrey said. ‘Amahl’ is an opportunity to bring together community members, guest artists and some faculty members. And that’s very exciting!”

The production also features a chorus of shepherds who come to share food and dance for the Kings, with members of the Oxford community making up most of the chorus along with students from the Ole Miss Opera Theatre program.

“The story of ‘Amahl’ is just beautiful,” Aubrey said. “There is a theme in it that hope and love are bigger than riches … It’s a universal story, it’s set in the time of Christ but it’s still relevant today.”

‘Amahl’ is a one-act opera that runs around 50 minutes, and wanting to present a complete evening of music for the audience, Aubrey reached out to Ole Miss Choral Director Don Trott.

“The second half of the evening will be very special as well,” Aubrey said. “We are going to present the Christmas portion of Handel’s ‘Messiah’.”

The chorus for “Messiah” will feature 161 voices from the University Chorus with the four soloists all alumni of the Ole Miss Music Department.

As is tradition, the audience will also be invited to sing the “Hallelujah Chorus” with the performers at the conclusion of the concert.

The performance is set to begin at 7:30 p.m. on Friday and tickets can still be purchased through the Ford Center box office. Tickets range between $18 and $30 depending on seat selection and can be purchased in person at the Ford Center, online by visiting http://olemissboxoffice.universitytickets.com or by calling 662-915-2787.