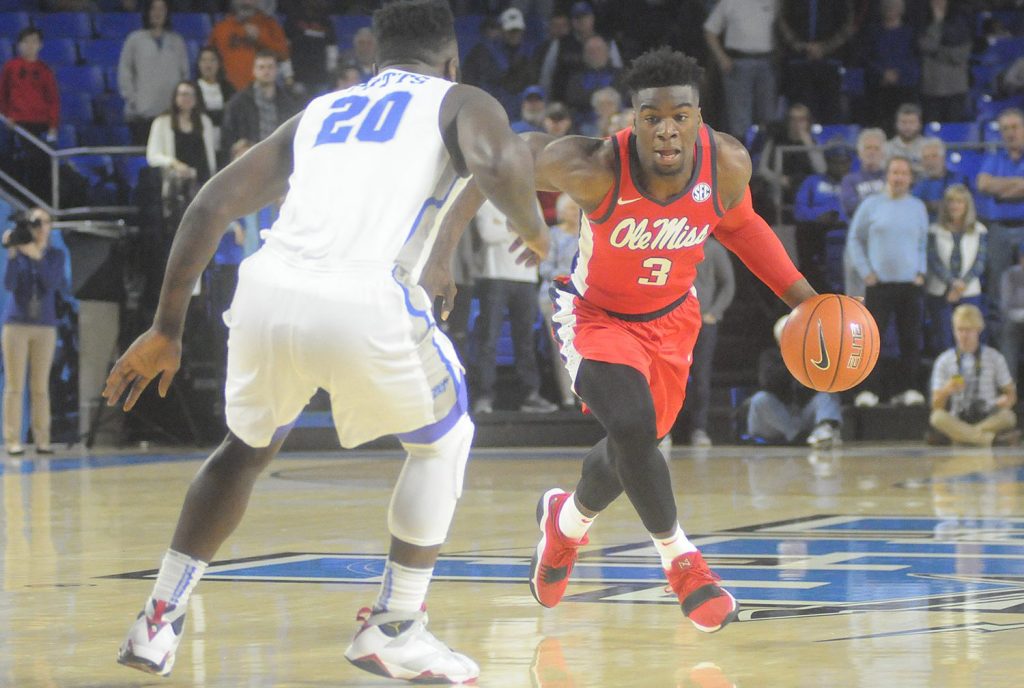 MURFREESBORO, Tenn. — A prime opportunity for Ole Miss turned into another one that fell by the wayside Saturday.

Middle Tennessee State clamped down on one of the Southeastern Conference’s top scoring teams before surging in the second half, and the Rebels missed out on another chance to bolster their postseason resume in a 77-58 loss at the Murphy Center. Ole Miss has lost three straight — all to NCAA Tournament teams from a season ago and top-100 RPI squads this season — and four of its last five.

A road game against an MTSU team that began the day with an RPI of 16 was the Rebels’ biggest resume-building opportunity so far this season. Ole Miss (4-4) led 34-33 at the half, but the final 20 minutes belonged to the Blue Raiders (7-1), who held Ole Miss to a season-low in points in their fifth straight win — and their fifth win in as many tries against SEC teams over the last three seasons.

“I think it gives us a lot of confidence,” MTSU forward Nick King said. “(MTSU) coach (Kermit) Davis always preaches to us about being a national team, and he says we’ve got to have the opportunity to show it and take advantage. Now that we’re getting the opportunity, we’re taking advantage.”

King, who came in averaging more than 24 points a game, scored 23 of his game-high 25 points in the second half as the Blue Raiders went up double digits at 50-40 with 13:22 left. A tip-in from Terence Davis, free throws from Markel Crawford and another quick bucket from Marcanvis Hymon got the Rebels within four with 4:44 left, but Ole Miss mustered just one field goal the rest of the way as MTSU ended the game on a 17-2 run to hand the Rebels their most lopsided loss of the season.

“We’re just not playing well enough to win, and we schedule good teams,” Ole Miss coach Andy Kennedy said. “We come in to Middle, and your toughness gets challenged and you just can’t make plays.”

Hymon led the Rebels with 12 points while forward Bruce Stevens, in his first start of the season, added 10. Davis matched a season-low with 10 points and grabbed eight rebounds.

Fellow big man Brandon Walters added a career-high 20 points for MTSU, which scored nearly half its points in the paint and finished plus-7 (35-28) on the boards. Giddy Potts finished with 14 points, four rebounds and four assists in a game that took less than two hours to complete with no player on either side finishing with more than three fouls.

The free-flowing contest seemed poised to benefit Ole Miss’ up-tempo style. The Rebels came in averaging nearly 84 points per game, but MTSU, seeking its third straight NCAA Tournament appearance, rarely allowed Ole Miss to get up and down as the Rebels had just three points in transition and committed 11 turnovers compared to MTSU’s six. The Blue Raiders got off 13 more shots than the Rebels in the second half.

“The biggest thing you’ve got to do to Ole Miss is you’ve got to get back,” Kermit Davis said. “Those guards get in transition off your live-ball turnovers. They’re great in transition. I just thought we didn’t turn it over, got ourselves back and just tried to make Ole Miss run half-court offense. When we did that, we guarded them pretty well.”

The teams went back and forth well into the second half with the Rebels’ switching defenses keeping containment early on King, who had just two points on 1 of 6 shooting in the first half. But the Blue Raiders’ leading scorer went inside and out to heat up as Ole Miss cooled down, hitting 10 of his final 14 shots from the field and scoring 11 of his points in the final 3:31.

“Give them credit,” Kennedy said. “Nick King was 1-for-6 in the first half and then you look up and the kid has 25 points and six rebounds. Players make plays. We need some guys to make plays, and we’ve got to play harder.”

Ole Miss will try to snap its losing skid Wednesday at The Pavilion against Sam Houston State. Tipoff is set for 7 p.m.