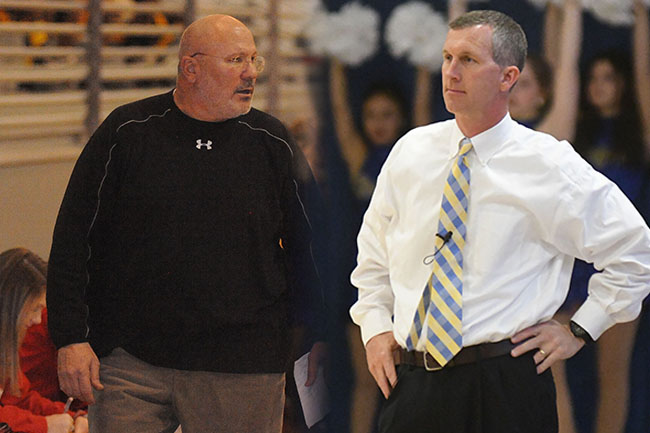 On Friday night Drew Tyler and John Sherman will lead their respective teams against one another in another installment of the Crosstown Classic, basketball edition.

The Oxford and Lafayette boys’ coaches are on opposite ends of the court now, but 30 years ago they shared the same bench and produced a historical season for Oxford.

In 1987 the Chargers won the Class 4A state basketball championship with Sherman serving as the head coach and Tyler as a standout junior point guard. It was the first ever state championship the school won, spurring a wave of titles that Oxford has filled their trophy case with ever since.

“It ignited the fire, I guess, for state championships to follow in other sports,” Tyler said. “To me, it’s a lot easier to win a state championship when you can be on the floor in the action. When you’re having to do it from a coach’s box and having to get teenagers to be in sync and go out and execute it’s a lot tougher.”

The Chargers went 27-8 in the 1986-87 season — ranked No. 20 in the state — and were led by Tyler and senior forward Corey Mitchell. The 4A state championship game was a rematch from the North Half championship, pitting Oxford against Noxubee County. The Chargers defeated the Tigers 64-49 inside the Jackson Coliseum, exacting revenge from a 77-55 Noxubee County win a couple weeks prior.

“It seemed like when Noah built his ark,” Sherman said laughing trying to recall that season. “It was fun coaching that whole bunch. That group bought in. That was just my second year (at Oxford). They bought in the first year and really bought in the second year. (Tyler) was a smart and heady point guard. That’s why he’s a good basketball coach.”

Tyler scored 16 points in the state championship game and was a driving force for the Chargers during their postseason run. It is a year that he is reminded of constantly. In his office on the wall directly behind his desk hangs a mat of his state championship patch, newspaper clippings and photos of himself from that year.

When asked about his playing days there is a gleam in Tyler’s eye. He enjoyed — and misses — those years.

“If I wasn’t 48 and my body would allow me, I’d rather play,” Tyler said. “But, I remember it like it was yesterday. A lot of unity on that team and a lot of things we do on and off the court are the same things that the ’87 and the 2001 team did.”

The Chargers came close to ending their 16-season state title drought last year when Oxford made it to the semifinals but lost to Laurel. Tyler’s longevity at Oxford is due to what he learned from playing under Sherman.

“He’s always loved basketball,” Sherman said of his former player. “He’s a student of the game. He still plays. He probably plays more than his players. He’s able to relate that experience as a player to a coach. He’s now coached long enough, been there long enough, to where he knows what he’s doing and developed to one of the best coaches in the state.”