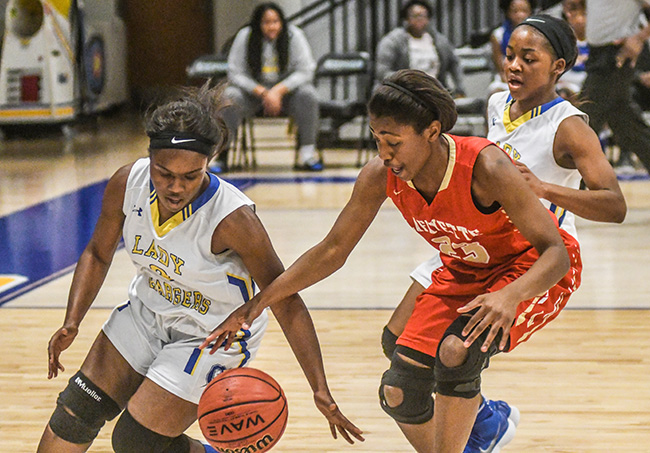 Oxford’s undefeated season sustained a test on Friday night as the Chargers edged out crosstown rival Lafayette for a 49-41 win.

The game featured seven ties and eight lead changes in a tightly contested matchup where the largest lead came in the first quarter when Oxford led the Commodores 13-6 with 2:21 on the clock.

Throughout the game, the Chargers (9-0) were plagued by struggles from the three-point line and at the charity stripe, hitting just 6 of 16 attempts on the night.

After trailing the entire first quarter, and entering the second period down 13-11, Lafayette (2-5) found a groove, posting a 5-point run to tie the game 17-17 with 2:12 remaining in the half behind a free throw from Kelan Buford.

The game tied again at 19-all, and another shot from Buford with under a minute in the quarter sent both teams to the locker room knotted up at 21-21.

“I feel like we were on defense most of the game,” Oxford boys’ head coach Drew Tyler said. “We like to score out of transition and get the numbers and Lafayette did a good job of spreading the ball out, they were patient and frustrated us some. I do think we maximized our offensive trips in the first half to get into the bonus, but we shot ourselves in the foot by missing free throws.”

The third quarter saw a back and forth affair with five lead changes during the eight-minute period, no team ever leading by more than two points, though Lafayette held the 32-31 advantage heading into the final quarter.

That lead maintained itself until the 4:36 mark when J.J. Pegues 3-point play put the Chargers up 40-38.

Oxford went on to outscore Lafayette 8-3, with all the points in the final minutes earned by Pegues and scoring-leader Drew Bianco.

“I challenged them at halftime about who can win a 16-minute game,” Tyler said. “We are sitting here at 9-0, but a number of our wins have been in overtime. We’ve got some senior leaders who just make big plays, and that’s what happened tonight down the stretch.”

Bianco led all scorers with 21 points, followed by Pegues with 18. Buford and Xavier Hill tied to lead Lafayette with 12 points apiece while Stephon Isom added 10 points for the Commodores.

In her second game back for the Lady Commodores, sophomore Azariah Buford made her presence known.

Buford posted 18 points in Lafayette’s 62-30 win over Oxford, while also earning five steals against the Lady Chargers in the game.

“It was a big night for her,” Lafayette girls’ head coach Shayne Linzy said. “She’s our catalyst, she makes us go.”

Buford has been out since Nov. 27 when she was injured in a game against Houston, and while she played during Tuesday’s game at Bruce, it was for limited minutes.

While the Lady Commodores (7-3) have missed Buford on the court, the absence of the 5-8 guard has served to make Lafayette a better team, Linzy said.

“They are all better tonight because she was out. They were all able to do a lot of other things and, of course, with her back it frees everyone up to go back to their original positions and we just clicked really, really well tonight,” Linzy said.

The Lady Commodores led 18-5 after one quarter and held Oxford (2-10) scoreless until the 3-minute mark in the second period. At halftime, Lafayette led 37-13.

Kimaya Dixon had a big game for the Lady ‘Dores, finishing in double digits with 15 points.

Saniah Campbell was the scoring leader for Oxford with 8 points, followed by Ashley Cook with 6 points.