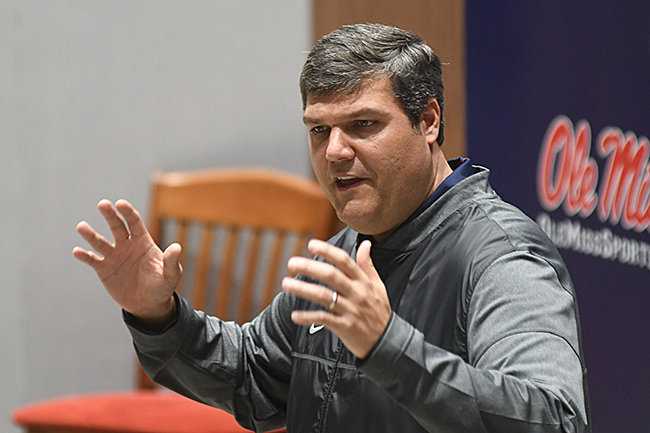 Ole Miss coach Matt Luke doesn’t anticipate making any changes to his coaching staff that he doesn’t have to.

After having his interim tag removed in late November, Luke said he would “evaluate everything” about the program he was inheriting permanently, including his nine on-field assistants. Asked this week if any changes were coming to the current staff, Luke said, “Not at this point.”

Offensive coordinator Phil Longo is reportedly a candidate for the same position at Rutgers, which is looking for their next playcaller after Jerry Kill recently retired because of health-related issues. The Rebels had the SEC’s top passing offense and averaged 32.8 points in their first season under the direction of Longo, a New Jersey native.

Longo is on a two-year contract at Ole Miss that would pay him $700,000 in base salary next season. Defensive coordinator Wesley McGriff, who’s in the first of a three-year deal, is the Rebels’ highest-paid assistant at a base salary that’s set to increase to $1.1 million next season.

Like every other Football Bowl Subdivision team, Ole Miss will soon be bringing another assistant on board. FBS teams are allowed to hire a 10th on-field assistant beginning Jan. 9, and Luke reiterated that hire will be made on the defensive side of the ball, though exactly what role will be filled hasn’t yet been decided.

“I’m not going to put myself into a certain position just yet because there’s a couple different ways I could go with it based on the guy I want to go after,” Luke said.

There could some rearranging among the Rebels’ recruiting staff, but Luke said any decisions on that likely won’t come until after he returns from the American Football Coaches Association Convention in Charlotte early next month.

How will Ole Miss’ early enrollees fit in?