Ole Miss coach Matt Luke to ‘evaluate everything in this program’ 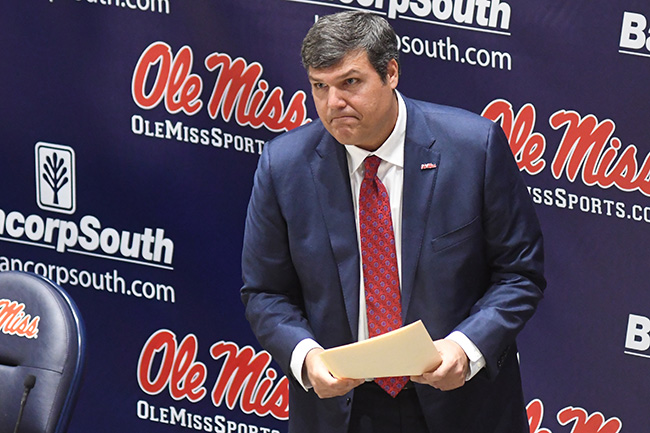 Matt Luke is introduced as the new head coach at the University of Mississippi during a press conference at the Manning Center, in Oxford, Miss. on Monday, November 27, 2017. (Bruce Newman, Oxford Eagle via AP)

A new era of Ole Miss football will bring about change.

Matt Luke just isn’t sure to what extent yet.

Luke was introduced as Ole Miss’ permanent coach Monday, three days after he formally interviewed for the job with athletic director Ross Bjork. Part of Luke’s pitch to Bjork was a vision for the program that starts with a change in the culture.

Ole Miss has combined to win just 11 games the last two seasons after averaging nine the three seasons before that. Of course, things have been just as rocky off the field with Hugh Freeze’s abrupt resignation dominating the headlines in the preseason and a long-running NCAA investigation that’s already delivered a bowl ban this season and could result in more sanctions once the Committee on Infractions issues its final verdict any day.

But Luke is moving forward with what he can control, assessing where the program is and where he wants it to be. The first alteration for Luke is a more direct approach.

“With the interim coach, really you’re motivating the kids,” Luke said. “But as a permanent head coach, things are going to be different. That’s just the way it’s going to be.”

Everything from how the Rebels approach recruiting to his coaching staff is subject to review.

Cornerbacks coach Jason Jones is the lone holdover from the previous regime on a staff that Luke said he became more pleased with as the season wore on, ultimately ending in a 31-28 upset of then-No. 14 Mississippi State to cap a 6-6 campaign. Still, changes could be coming.

FBS teams will soon be able to expand their on-field staff from nine to 10 coaches, and Luke said he’ll look to add a coach to the defensive side of the ball when the time comes.

The NCAA’s Division I Council adopted legislation in the spring that will allow teams to hire a 10th on-field assistant beginning Jan. 9, 2018.

Why did Ole Miss hire Matt Luke after a…