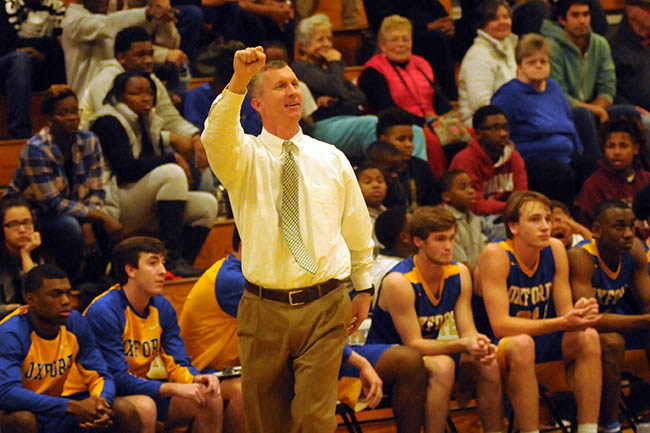 He picked up win No. 500 as a head coach against Tupelo on Friday night in dramatic fashion. It is an accomplishment that is even more impressive as he achieved every single win at one place.

499 wins later, Tyler still has as much passion for the game as he did when he helped bring Oxford their first state championship as a player in 1987.

It is also a milestone Tyler does not want to take sole credit for.

“A 500th win in that column I mean it’s not about Drew Tyler,” Tyler said. “Oxford’s been good to me. …I have to think back to all the student athletes I’ve had and it’s their wins. The 500th win, that’s a good mark”

Tyler’s coaching career was one that almost did not happen. His brothers went into business with one — Cam Tyler — the president of Mechanics Bank in Water Valley and Oxford and another in charge of Trustmark banks.

He dabbled in the thought of business school but eventually opted to go the rout of sports, something Tyler had been around all his life.

Once he had his career path mapped out, coaching at Oxford was not a given, yet. He went on his honeymoon jobless but it was on that trip he received a call to come be an assistant coach under John Sherman — his former coach from that 1987 championship team— at his alma mater.

So, Tyler coached under his mentor for four seasons before Sherman took an assistant coaching job at Mississippi State. It was then that Tyler moved up to become the head coach of the team he had such affinity for.

It is where he has been ever since. There were times Tyler was offered the opportunity to coach at the next level, but every discussion with his family yielded the same result. Oxford is where he was supposed to be.

The 500 wins are an impressive mark on their own right, but Tyler has done it in a span of 667 games, winning 75 percent of games he has coached. It has also brought Oxford their only other state championship in boy’s basketball with a win in 2001 to claim the Class 4A state championship.

“500 wins in 667 games just kind of makes you slow down and enjoy moments you’ve had,” Tyler said. “Think about those moments. Enjoy this and just make sure I’m helping student athletes.”

Coaching, and having success at it, was in Tyler’s genes.

His dad, Bob Tyler, is one of the most successful coaches in Mississippi. Having coached at the high school level at places such as Meridian where he went undefeated two seasons in a row and claiming a Big Eight title in the late 60s to being the head coach at Mississippi State for 10 years. He also coached under Bear Bryant at Alabama.

But it was the elder Tyler’s time at Ole Miss that is the most important. He coached under Johnny Vaught and worked with the offense and more specifically the quarterbacks.

Even more specifically, he worked with Archie Manning.

“My mom asked my dad how much it paid. My dad said when Johnny asks you to come work for him, you don’t ask about money,” Tyler said laughing.

The time spent working with Manning was special to the Tyler family. Tyler’s father and Manning still stay in contact and it was their friendship that gave Drew his name. Archie is from Drew, Mississippi.

There is even a story of Manning asking Tyler’s father what would he have named his son if he had been from Tutwiler. Well, there would be a Tutwiler Tyler roaming the sidelines at Oxford racking up win after win.

500 wins is a mark Tyler will never take for granted, but the season is not finished and he has hopes of still adding to that mark in early March.

“I’m shooting for about 518 wins, because that means we’ll be back in Jackson at the roundhouse,” Tyler said.

Oxford boys rally to defeat Tupelo for key 2-6A…