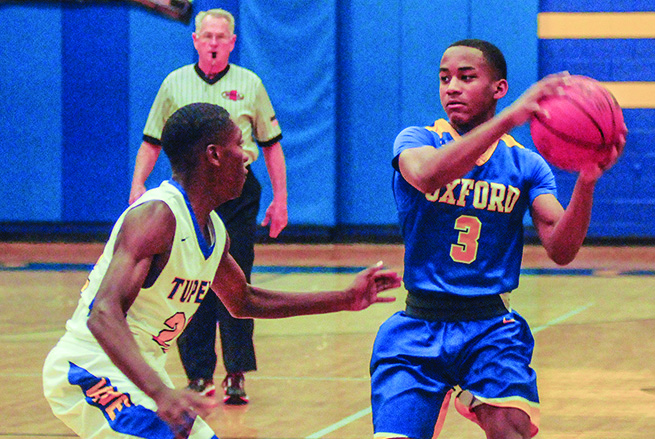 TUPELO — If Drew Tyler was going to pick up his 500th win, on the road, in a key region game, Oxford was going to have to do something special.

That is exactly what happened.

With a minute left in the game Drew Bianco hit back-to-back layups to give the Chargers their first — and only — lead of the game. Oxford held on to defeat Tupelo 59-56 in what could only be described a their biggest win of the season at Tupelo High School on Friday.

“500th win is awesome but better than that, 1-0 in 6A region play,” Tyler said. “Winning on the road and now we got two home games to protect our turf with a huge region game Friday. It’s a good feeling to know we’re 1-0.”

Bianco and Tucker Scott each scored a game-high 16 points while Hiram Wadlington and Bianco each pulled down a team-high six rebounds.

Wadlington’s rebounds were all on the defensive end, with the last one coming with nine seconds left and Oxford having a 57-56 lead. Wadlington was fouled on the rebound and nailed two free throws to seal the historic win for the Chargers (13-2, 1-0 2-6A).

The win had to be one of a comeback variety. Tupelo (14-5, 0-1) jumped out to a 20-8 lead in the first quarter, putting Oxford behind the eight ball early.

The Chargers struggled with the Golden Wave’s transition game for more than three quarters, getting beat down the floor or leaving a Tupelo player open underneath the basket.

“Midway through the third quarter we started pushing towards the sideline,” Tyler said. “We talked about it at halftime. We had to get them out of the middle of the floor. So, once we got them in the half court set against the sideline that answered a lot of questions.”

Once Oxford solved the Tupleo riddle, the seniors took over. Bianco’s layups came when Oxford needed them most. One was an easy layup and the winning basket came off a breakaway.

“I was just hoping it didn’t get blocked on those layups,” Bianco said. “It means a lot. Coach Tyler is a guy I’m going to remember for the rest of my life. He’s like a second dad to me.”

After a strong start in the first quarter the Oxford girls faltered in the later stages, giving Tupelo a 67-50 win in both team’s region opener.

Claire Wooten and Bri Ducksworth each scored a team-high 15 points while Ducksworth pulled down 10 boards in the Chargers’ 10th straight loss.

The opening quarter was back-and-forth with Oxford (2-13, 0-1) playing some of their best offensive basketball in recent weeks. Tupelo managed to grab 20-15 lead after the first eight minutes and held on for the wire-to-wire win.

“I thought we came out with much better energy,” Oxford coach Cliff Ormon said. “I thought Bri came out and played really hard and kind of let us know we could compete. There’s no doubt we can compete but she gave us an inside presence. We did have some moments where (Tupelo) extended out and that’s the big thing with this group. Sustaining effort.”