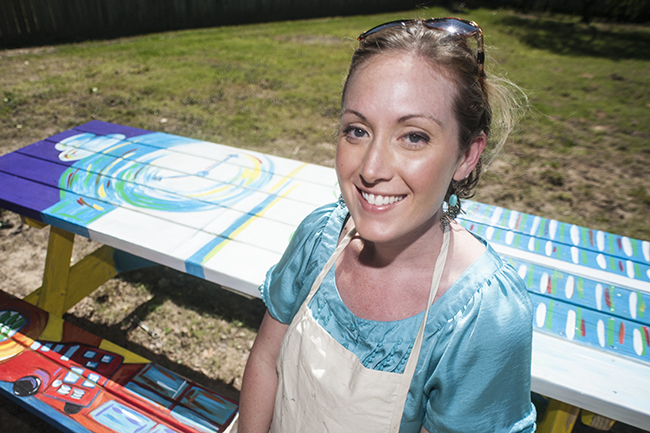 The owner of Studio Whimzy, Sarah Kathryn Dossett has been selected to create the artwork for the 2018 Double Decker Arts Festival.

Dossett grew up in Madison-Ridgeland and began her college career at Memphis College of Art in the fall of 1999. She then transferred to the University of Mississippi in 2001 to study printmaking, in which she earned her BFA in 2003. While earning her degree, Dossett also studied art in Cortona, Italy through the University of Georgia. In addition to owning and running Studio Whimzy, she also teaches art to 3 and 4-year-olds twice a week at the Willie Price Lab School.

Dossett said her art style is “ever changing.”

“I spend time painting and printing,” she said. “I also enjoy mixed media, watercolor, pen and ink and oil pastels. The joy comes from not keeping myself on one particular shelf, but instead trying all possible outlets for my ideas … I enjoy texture, color, finishes, line quality and contrast. I also like to use materials beyond canvas or paper when I work and will paint on just about anything.”

Dossett said it seemed fitting after seven years at the studio to bring all the elements of her art together to design this year’s poster.

“I tried to make these images work together in a fresh way and still be traditional,” she said. “Double Decker Festival weekend is a weekend that I look forward to all year long. As an artist and as an Oxonian I feel very lucky to be able to participate.”

The actual poster will be unveiled during a press conference at 11:30 a.m. on Feb. 8 at the Visit Oxford office on the Square.

Oxford’s Double Decker Arts Festival is a free, two-day festival inspired by the literary town’s 1994 import of a double-decker bus from England. The festival attracts more than 65,000 people and is the recipient of more than 25 awards, including Best Festival by “Mississippi Magazine” and a Top 20 event by the Southeast Tourism Society.