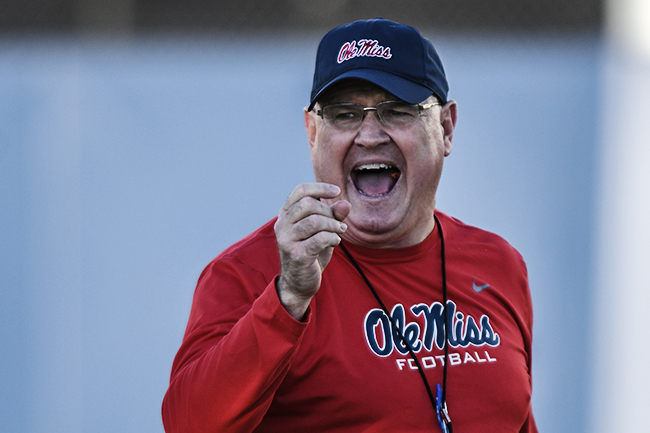 Ole Miss has a spot to fill on its coaching staff after losing an assistant to another SEC West team.

Linebackers coach Bradley Dale Peveto has resigned to take a job on Jimbo Fisher’s staff at Texas A&M, the EAGLE has confirmed. Peveto, who doubled as the Rebels’ special teams coordinator, was at Ole Miss for one season after being hired by then-head coach Hugh Freeze in December 2016.

It will be the fourth stop in the SEC for the 55-year-old Peveto, who also coached at Arkansas and Kentucky and was in his second stint as an assistant at LSU before coming to Ole Miss. Peveto has also had stints at Southern Miss, Houston and Middle Tennessee State while serving as the head coach at Northwestern State from 2009-12.

It’s unclear exactly what capacity Peveto will serve in for the Aggies, though the Ole Miss Spirit, which first reported the news, reported it would be similar to his role at Ole Miss. Fisher, the former Florida State coach who was given a 10-year, $75-million contract to take over the Aggies’ program in December, has yet to hire a linebackers coach or special teams coordinator.

Ole Miss’ defense was among the nation’s worst in several categories this past season, including total defense (115th), scoring defense (109th) and rush defense (123rd), with much of the play at the second level once again being a sore spot. Outside linebacker DeMarquis Gates led the Rebels with 114 tackles, but no other linebacker had more than 39 stops.

Ole Miss’ staff under head coach Matt Luke appeared to be set with the hire of former Oregon cornerbacks Charles Clark in December as the Rebels’ 10th on-field assistant, but there’s more work for Luke to do.