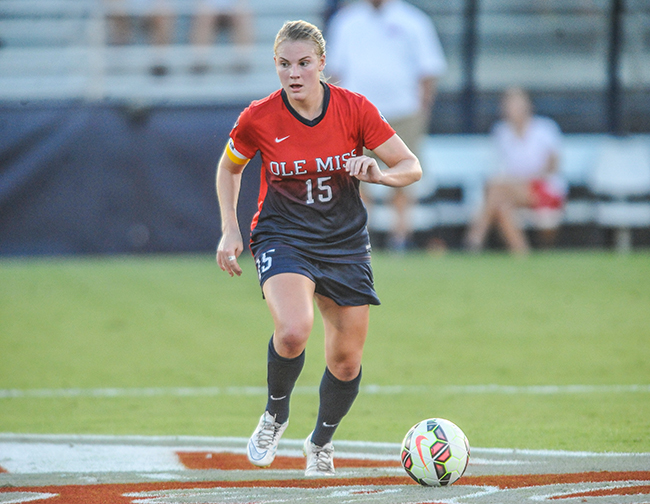 Ole Miss' Jessica Hiskey (15) vs. Arkansas in women's college soccer action in Oxford, Miss. on Thursday, September 25, 2014. The match ended in a 1-1 draw after double overtime.

“I couldn’t be more excited to be a part of the Ole Miss Soccer family again,” Hiskey said. “I want to thank Lynette Johnson and the rest of the coaching staff for this tremendous opportunity to return to Oxford and Rebel Nation. My time here as a student-athlete was an incredible experience and it is a dream come true to be able to come back and continue to grow this program with such a hardworking group of individuals. I am eager to get started working with Matt and the rest of the staff in preparing the girls for a successful fall season.”

Looking to continue the momentum from a 2017 season that saw Ole Miss rank as one of the most potent scoring offenses in the country and receive a bid to the NCAA Tournament, Mott and his staff launched a national search for the Rebels’ new assistant coach. In the end, they didn’t have to look too far, turning to a familiar face.

“I am thrilled at the opportunity to bring back one of the all-time best Rebels as our new assistant coach,” Mott said. “My staff and I spent much time scouring the country and looking for the best fit for the program. Jess certainly proved during the interview process to be just that.  We look forward to having her on campus soon to start with the team as we begin our spring season.”

After finishing her collegiate career, Hiskey became just the fourth known Rebel to sign a professional contract, joining Skövde KIK in Sweden. During her two-year stint, she helped Skövde KIK achieve its highest league finish in club history (third) as well as the program’s lowest goals against average for a season.

Hiskey tested the waters of coaching during the spring of 2016, serving as assistant coach for the Oxford Soccer Club. Playing the role of instructor and mentor for the youth squad, Hiskey also designed and implemented training sessions twice a week for the club.

From 2012-15, Hiskey was a stalwart for the Rebels both on the back line and at midfield, starting 74 matches and logging more than 7,000 minutes on the pitch during her career. She found the back of the net 10 times in a Rebel kit, dishing out five assists.

During her senior campaign, Hiskey helped lead Ole Miss to its first-ever NCAA Sweet 16, starting all 23 contests on the year. She became the first Rebel defender to be named All-SEC since 2011, collecting second-team honors after registering five points on two goals and one assist.

The Franklin, Tennessee native put together her most impressive offensive season as a junior in 2014, scoring six goals and adding two assists for 14 points. Of the 1,840 minutes for Ole Miss on the season, Hiskey was off the field for just 31 of them.