Will surging Alabama be full strength against Ole Miss? 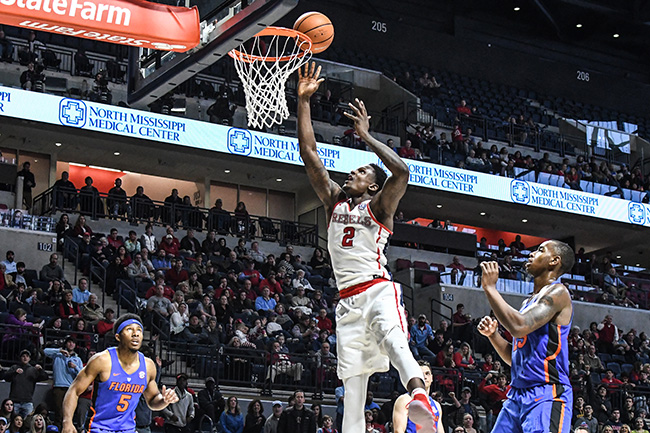 Auburn and Mississippi State got the benefit on playing Alabama without Collin Sexton.

Sexton, the Crimson Tide’s star freshman point guard, missed both of Alabama’s games last week with an abdominal injury. A five-star prospect and McDonald’s All-American coming out of Georgia’s Pebblebrook High during the last recruiting cycle, Sexton has lived up to the hype when healthy, leading the Crimson Tide in scoring at 19.3 points per game and dishing out a team-high 55 assists.

But Sexton is still being evaluated ahead of tonight’s game against the Rebels at The Pavilion (7:30 p.m., SEC Network), Alabama coach Avery Johnson said Monday.

“Once he’s healthy, he’ll play,” Johnson said Monday, according to the Times Daily. “But as of this moment, he’s not healthy enough to play.”

Sexton’s absence didn’t hurt Alabama (13-6, 5-2 SEC) much against No. 20 Auburn or Mississippi State as the Crimson Tide won both games as part of the four-game winning streak they’ll bring to Oxford. Alabama snapped Auburn’s 14-game winning streak with a 76-71 win Wednesday before following it up with a 68-62 victory over the Bulldogs on Saturday that pushed the Tide into sole possession of third place in the SEC standings.

Alabama also won those games with forward Donta Hall (10.8 points, 6.9 rebounds) playing limited minutes after undergoing surgery on his fractured wrist, but Johnson told the Times Daily Hall was cleared for contact and should be good to go against Ole Miss (10-9, 3-4). There are other threats the Rebels will have to worry about, too.

Freshman John Petty, another five-star signee, dropped 27 points against Auburn and is the Crimson Tide’s second-leading scorer at 12.4 points per game. The 6-foot-5 Petty is also shooting better than 38 percent from 3-point range. Sophomore guard Dazon Ingram (11.2 points per game) is the fourth player averaging double figures for an Alabama team shooting 46.4 percent from the field — the fourth-best clip in the SEC.

Alabama starts another week of resume-building opportunities for Ole Miss, which lost out on a pair last week on the road against Texas A&M and Arkansas. Both setbacks came down to the last handful of possessions with the Rebels losing by a combined six points, though defense was again a problem their last time out in surrendering 97 points to Arkansas to negate a 30-point outing from Terence Davis.

Alabama, one of eight SEC teams projected to make the NCAA Tournament in the latest bracket projections released by ESPN’s Joe Lunardi, comes in at No. 26 in the NCAA’s latest RPI rankings. Ole Miss’ RPI sits at 100 heading into the final two-thirds of the SEC slate, but nine of the Rebels’ final 12 games come against top-50 RPI teams, including a trip to Texas on Saturday as part of the SEC-Big 12 Challenge.

.@CoachAvery6 elaborates more about Collin Sexton's status: "Once he's healthy, he'll play. But as of this moment he's not healthy enough to play." https://t.co/whPL9Ycy6q