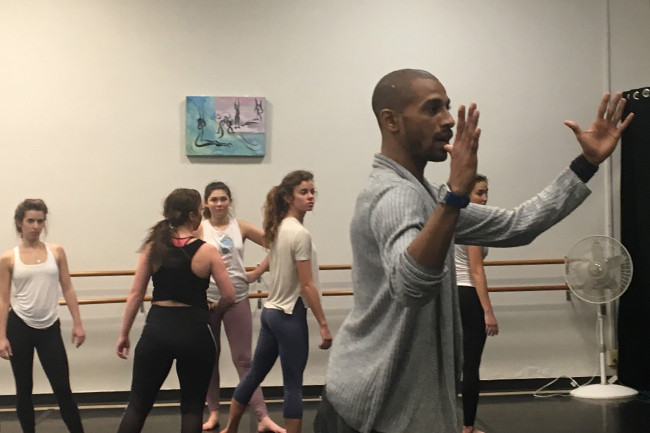 JENNIFER MIZENKO Osnel Delgado, choreographer from Malpaso Dance Company, which is based in Havana, Cuba, works with students from Mississippi: The Dance Company on Monday, January 22, 2018.

The Malpaso Dance Company from Havana, Cuba, is returning to the University of Mississippi for a performance featuring students from the Cuban study abroad dance class.

The performance will be held on Saturday at 7:30 p.m. at the Ford Center, and tickets are available at the UM Box office and on their website.

Giving the students a chance to showcase their skills after immersing themselves in Cuba’s vibrant dance culture is what theatre arts professor Jennifer Mizenko calls a labor of love.

The students enrolled in a two-week study abroad course last month, during which they studied choreography by Osnel Delgado, Malpaso’s artistic director, founder and choreographer.

“Osnel Delgado set an original work on the students. While we were in Cuba, we worked with his ballet mistress and parents,” Mizenko said. “We’d have classes and a two-hour rehearsal each day, working on refining the piece. This week they’re really digging into the piece and fine-tuning all aspects.”

The student dance will start the night, with the main performance featuring 10 Malpaso dancers from Cuba’s premier schools to follow.

Cuban dance discipline is something Mizenko compares to that of the Old Soviet Union system. Each province of Cuba has its own elite dance school, and she says Malpaso came from Delgado’s desire to break the mould and channel more contemporary themes.

Malpaso is best known for its modern interpretation of traditional Afro-Cuban dance styles, something dancer Mary Lacy Lusk says was a welcome challenge.

“It was definitely interesting working with Osnel because none of us knew what to expect coming into it,” Lusk said in a news release. “It was definitely challenging because just the style of dance is completely different than what we’re used to. I feel like he hears different parts in the music than we’re used to, so it’s hard to kind of match his musicality. It’s challenging, but in a good way.”

Mizenko describes Cuba as a place where music is around every corner and dance is a revered art form.

“In a way it’s like a dancer’s dream place to be, because the whole society honors and values dance,” Mizenko said. “We stayed in people’s homes, and my host knew names of famous dancers the way Americans know the names of football players.”

During the course, students were able to explore the country through attending Cuban cultural events and tours of Old Havana. Mizenko says they learned the perceptions of the country are changing through going on an ordinary night out for Cubans.

“We went to a place called Fabríca del Arte,” she said. “It’s a factory that’s also a gallery, a nightclub, a restaurant, a movie theater. It’s been turned into this social spot where people of all ages, all colors go. It’s filled with this very modern cutting-edge photography and paintings. Americans are late to the Cuban party.”

For those planning to attend the performance tomorrow night, Mizenko says to prepare for an eye-opening, immersive experience.

“Expect to be mesmerized, and to fall in love with the Cuban dancers,” she said. “They’re beautiful and generous people. Expect to really be drawn into the dance.”