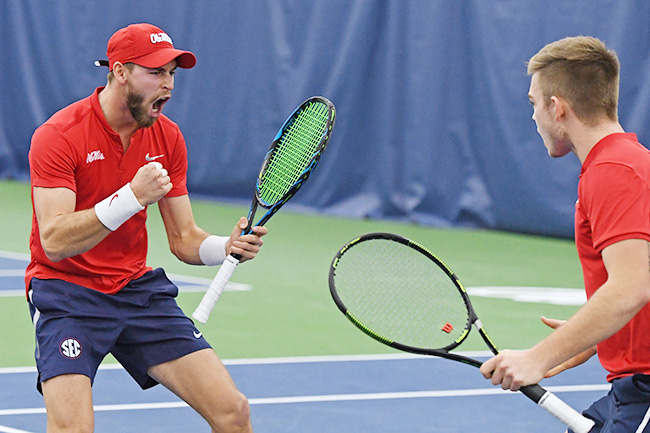 Rebels Take Down No. 9 Baylor
Senior Gustav Hansson Clinches Win at No. 1 Singles

With the match tied 3-3, senior Gustav Hansson, ranked No. 32, delivered the final blow, taking a decisive third set against 11th-ranked Johannes Schretter to clinch the victory. Hansson won the first set 6-3, but got broken late in the second, and Schretter served it out for 7-5 to force a third set. Hansson broke early and then saved break points for a 3-1 lead. The All-American broke again for 4-1 and ended up taking the set 6-1 to clinch the Rebels second straight win in the series. Hansson clinched the previous win in Waco in 2016 playing at No. 3 singles.

The stage was set with a great crowd on hand for the early first serve, and the Rebels didn’t disappoint, taking the all-important doubles point. Hansson and Zvonimir Babic won their match 6-3 at No. 2 and then Baylor earned a 6-2 win on court three. Tim Sandkaulen and Fabian Fallert clinched the point defeating the No. 2 ranked team in the nation 6-3 to hand the Rebels the 1-0 lead.

Baylor picked up a straight set win at No. 5 singles to get on the board and then took a 2-1 lead with a win on court three.

The Bears regained the lead (3-2) winning a tight two-setter on court six, sending everyone to courts four and one where the Rebels led in both matches.

At four, Fallert took the first set against his opponent, Jimmy Bendeck, 6-4 and had match points in the second set at 5-4, before Bendeck rallied to force a tiebreaker. Fallert regrouped and won the breaker 7-6(4) to set up Hansson for the clinch.

At the Net with Head Coach Toby Hansson…
“It was an incredible college tennis match for everyone to witness in our new facility, a very memorable match and one of the best matches I’ve ever been a part of. The guys fought hard top to bottom and earned this win. We knew that we needed to come out quick in doubles and we did that. We had a lot of energy and that carried over to singles as well. We’ve played Baylor a lot and they always have a very good team. They are tough competitors who bring a lot of energy. We matched them today in intensity with the help of the crowd. It was an amazing college tennis match!”

On Closing It Out at the End…
“Overall, the effort from all the guys was incredible. They (Baylor) got a couple quick points, but we just continued to battle and kept our composure during some tough situations. We hung in there and kept fighting. Tim played a tremendous match beating a very good player. Fabi could have closed out his opponent a couple times, but he was able to reset in the tiebreaker, refocus and get it done. Mentally, it was a very strong performance.

“Grey came back in his second set and made it close, which makes a big difference. We just never gave up.”

On Gus’s Match…
“Gus has been there before. It was a physical match, with a lot of extremely long points. Gus was just a little bit physically stronger in the end. He really felt the crowd support and that helped him a lot.”

On the Crowd…
“The crowd was fired up and into it the entire time. What a weekend we’ve had here at home! This is a dream start to the season.”

Senior Gustav Hansson
“The crowd was insane today. It’s the best crowd we’ve had so far and it was a lot of fun. The entire team played well and we had a lot of energy. I am really proud of Fabi, it was a great win, and Tim right next to me played unbelievable.”

On his third set…
“I was a little frustrated at the beginning of the third set, but then I got the energy going and felt like I was in control in the third set. I also got a huge boost from the crowd, which was awesome.”

Junior Fabian Fallert
“From the beginning, we knew we had to keep the energy going, because they are a team who plays with a lot of energy. We wanted to control the energy and involve the crowd. Obviously, Gus, Tim and I won our first sets. Gus and I fought a little adversity late in our matches, but we stayed mentally tough. That was a big key.”

On Having Gus as Last Man on…
“Honestly, if we could choose anyone to have as the last guy on the court, it would be Gus. He’s pure ice and he loves it. He thrives in that environment.”

Next up…
The Rebels head to New York next for a pair of matches against Princeton on February 9 and No. 17 Columbia on February 11.