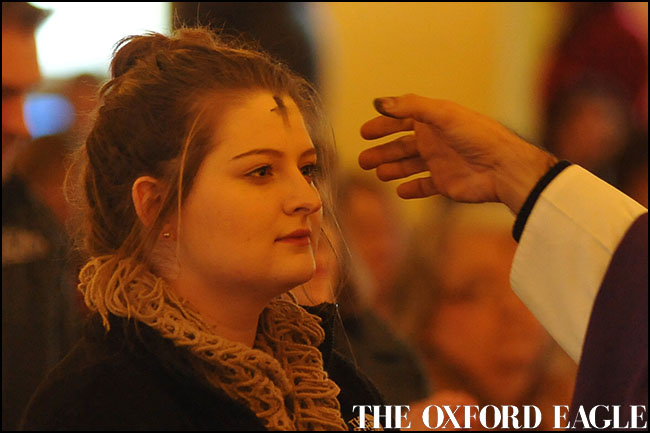 Ashes are distributed during an Ash Wednesday service at St. John the Evangelist Catholic Church in Oxford, Miss. on Wednesday, February 10, 2016.

Catholics around the nation are faced with a holiday conundrum Wednesday, which this year is both Valentine’s Day and Ash Wednesday, a day that begins 40 days of prayer and giving alms.

Father Joe Tonos with St. John’s the Evangelist Catholic Church in Oxford took to social media last week to help the conflicted figure out the right thing to do.

Tonos said he’s been getting a lot of questions about whether it would be OK to eat chocolates or go out for Valentine’s Day dinner on Ash Wednesday.

“The “official” statement is ‘Tell people to go out on Mardi Gras for Valentine’s,’” Tonos told the EAGLE on Monday. “To be honest, I’m not telling anyone to do anything. It’s Ash freakin’ Wednesday. You know what to do.”

The last time the two holidays happened on the same day was in the 1940s.

“The Faithful are to abstain from meat and to fast on Ash Wednesday (and Good Friday),” Tonos explained. “So there is a conflict between a day of decadent, romantic indulgence celebrated in the secular culture and this traditional day of austerity and gravity. In other words, the Catholic calendar is limited on the days of required fasts and this year it drops on the one day people associate with lavish excess.”

Tonos used a meme on the church’s Facebook page on Feb. 6 depicting Ryan Gosling that said, “Hey girl … I’d like to take you out for a small meal that when combined with another small meal doesn’t exceed your large meal. #catholicpickuplines.”

“I saw that meme on Twitter and thought it summed up perfectly the solution to the Valentine’s ‘conflict.’” Tonos said.

During fasting, followers are allowed two small meals or snacks as long as long as they don’t add up to one large meal.

“Our Savior Jesus Christ suffered and died for you so you can probably do without that box of Whitman Samplers for one day. I got faith in you. You got this,” Tonos wrote in his Facebook post.

Tonos said Valentine’s Day vs. Ash Wednesday is not the only conflict Catholics and Christians encounter where holidays clash.

“St. Patrick’s Day, if it falls on a Friday, always creates issues for those who like to celebrate the Saint’s day by eating corn beef and cabbage drinking a pint – or eight,” he said on Monday. “Since our diocese is Irish heavy as far as clergy influence, the Bishop usually gives a dispensation (permission to forgo the fast and abstinence) and the clergy can get their lamb’s stew and maybe a bit of a drink after a round of golf.

Fridays during Lent are to be “meatless” for the Catholic but sometimes a bride and groom may ask for a dispensation for their rehearsal dinner if they marry during Lent.

Tonos said in Oxford, it’s always a conflict when there are home baseball games during the Triduum (three holy days of Holy Thursday, Good Friday, and Holy Saturday).

“On Good Friday, while the faithful are in St. John’s kneeling and weeping before the exposed cross of the Crucified Christ during a moving liturgy, you can also hear the stadium blast out John Fogerty’s’ ‘Centerfield’ and the cheer from the crowd,” he said. “Lord knows how many Catholics are out there eating nachos and dancing in a beer shower. Jesus wept.”

Tonos said he if someone in his congregation has a serious issue debating whether or not to indulge on Valentine’s Day, he feels he isn’t doing his job.

“I told them Sunday that if they decide they want to have chocolate covered strawberries, a steak dinner, champagne and romance, then go on and go to Hell,” he said in his usual humorous but bluntly honest manner.

Also this year, Easter Sunday will share the day with April’s Fool, but Tonos said he doesn’t see much of a so-called conflict.

“In the Eastern Orthodox Church, the custom is to tell jokes on Easter as Jesus got the last laugh on Death by rising from the tomb,” he said, then tossed in an Easter joke.

“What do you call a rabbit who has a degree in anesthesiology? The Ether Bunny!”