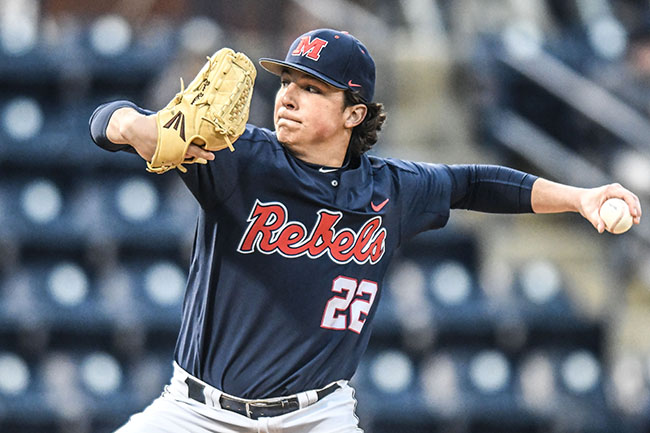 Ryan Rolison entered his sophomore season as a preseason All-American and widely considered one of the top prospects for this year’s Major League Baseball First-Year Player Draft.

It didn’t take long for the left-hander to show why.

Rolison was nearly untouchable in five shutout innings, and Ole Miss’ offense took care of the rest as the Rebels opened the season with a 7-3 win over Winthrop on Friday at a chilly Oxford-University Stadium. Rolison faced just three over the minimum and had just three balls put in play on his way to a career-high 12 strikeouts.

The teams will play the middle game of the series Saturday at 1:30 p.m. with junior right-hander Brady Feigl (2-2, 4.08 earned run average in 2017) getting the ball for Ole Miss, which improved to 17-1 in openers during the Mike Bianco era.

The Rebels (1-0) gave Rolison early support with all of their runs coming in the first four frames and finished with 13 hits, though it was the timely knocks that helped Ole Miss build a 6-0 lead against Winthrop starter Zach Peek (0-1).

Keenan’s first career at-bat went for a two-run double into the right-field corner in the second before consecutive two-out singles from Nick Fortes and Thomas Dillard in the third set the stage for designated hitter Tim Rowe, who deposited Peek’s 2-1 offering over the wall in right-center to push the Rebels’ lead to 5-0.

Senior Will Golsan delivered a two-out RBI single in the fourth. Keenan and catcher Cooper Johnson each finished with two hits while Dillard, who struggled to a .206 average as a freshman last season, went 3-for-4 and scored three runs.

“We were able to get the timely hit, the two-out hit, and bunch the hits together, which we didn’t do last year,” Bianco said.

It was more than enough support for Rolison (1-0), who retired six of the first seven batters he faced and struck out the side in the second before allowing a leadoff double to Scout McFalls in the third. It was the only hit Rolison yielded as he baffled the Eagles’ lineup with a fastball that sat in the low 90s and a biting slider.

“I was able to find my fastball early along with my slider, so I felt really good,” Rolison said. “I think there was a little adrenaline in me in the first inning on opening day, but I settled in, found my slider and was able to fill up the zone.

“I was just going right at guys, challenging them with my stuff and forcing them to make themselves get out.”

Rolison fanned the next three batters to quickly end the threat and allowed just one more baserunner over the next two frames, punching out four of the final five batters he faced. He finished his day by getting Brandon Fite swinging to end the top of the fifth, giving him the most strikeouts for an Ole Miss pitcher in an opener since Lance Lynn also had 12 against Minnesota to start the 2008 season.

“Electric stuff,” Bianco said. “On the first night when it’s chilly and the wind’s’ blowing in, there were times he made it look pretty easy. That’s why he’s got all the accolades. He’s got some great stuff and pitched great tonight.”

All the punchouts drove Rolison’s pitch count up to 81 on a night when the temperature dipped into the high 40s. Rolison wanted to go one more inning, but Bianco said he didn’t give it any thought.

Houston Roth came on and surrendered two unearned runs in the sixth after Ole Miss committed a pair of errors but combined with Will Stokes to limit the Eagles (0-1) to three hits over the final four frames.

“If you run him back out there, then you risk pulling him out,” Bianco said. “I wanted Houston to start the inning. I thought that was a good night for (Rolison) and a good way to finish it.”

Watch Rolison talk about his outing in the video below.