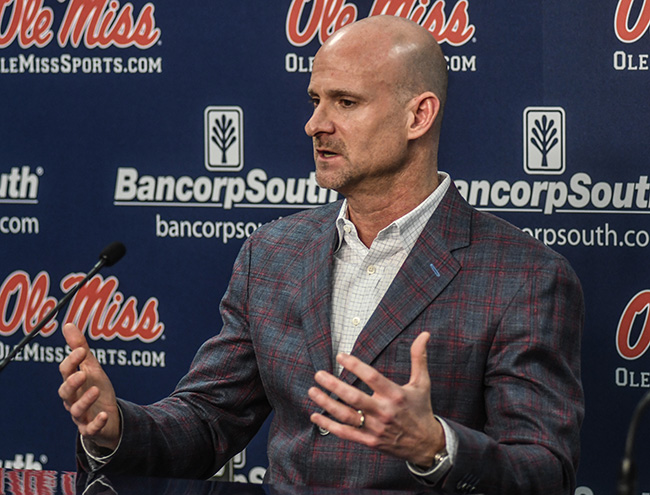 Ole Miss head coach Andy Kennedy speaks at a press conference at the Pavilion at Ole Miss in Oxford, Miss. on Monday, February 12, 2018. Kennedy, in his 12th season as Mississippi head coach, announced he would not return as coach following this season.(Bruce Newman, Oxford Eagle via AP)

Kennedy on Sunday announced he’s stepping down immediately with at least five games left in the Rebels’ season counting next month’s Southeastern Conference Tournament. His decision comes a day after Ole Miss fell at Mississippi State for its seventh straight loss — the program’s longest losing streak since also dropping seven straight during the 2005-06 season — and nearly a week after Kennedy announced his resignation would come at the end of the season.

Assistant Tony Madlock will serve as the Rebels’ acting head coach the rest of the way.

Kennedy said his initial decision to resign Monday was made with the intent to lift a cloud of speculation hovering over the program about his job security in addition to allowing athletic director Ross Bjork to get a head start on his search for the Rebels’ next coach while relieving any external pressure his players may be feeling.

In an apologetic statement, Kennedy said he didn’t feel like the latter was being accomplished with him still at the helm.

“It has become readily apparent to me that my continued presence as the head coach is proving detrimental to these players finishing the season in a fashion that is representative of the standard for this program that has been clearly established and maintained for over a decade; therefore, I believe that it is in everyone’s best interest that I exit my role as head coach effective immediately,” Kennedy said. “We all know that ‘clean breaks’ are always best, and I should have realized this last Monday. My apologies.

As I’ve stated before, I am very thankful to have had the opportunity to serve as the head coach for men’s basketball at the University of Mississippi for 12 years! This community, this university and the SEC have all overwhelmed me and my family with incredible grace and support. We will forever be woven into the fabric of this very special place.”

Bjork said he fully supports Kennedy’s decision after speaking with him Sunday morning.

“While we had hoped to relieve some pressure with last week’s announcement, it simply did not work out that way,” Bjork said in a statement. “Our student-athletes are the most important aspect of our athletics program, and we must always put them in the best position for success no matter what. Coach Kennedy will always be remembered as an Ole Miss Rebel, and we wish him the best.”

It’s an unceremonious end to Kennedy’s 12-year tenure in Oxford. The dean of SEC coaches leaves as Ole Miss’ all-time winningest coach and led the Rebels to two of their eight NCAA Tournament appearances, though Ole Miss will miss the Big Dance for the third straight year barring an upset run to the SEC Tournament championship.

The Rebels are in line for their first losing season under Kennedy, whose belief that Ole Miss’ blend of experience and talent would help the Rebels compete in an improved SEC hasn’t come to fruition. Instead, Kennedy has voiced frustration throughout the season about his team’s lack of awareness and execution in close games and his own inability to get that message through to such a veteran team, frustration that peaked after the Rebels’ home loss to Arkansas on Tuesday.

Ole Miss has lost nine of its last 10 games — the lone win coming at home against Alabama on Jan. 23 — and is losing by an average of 15 points during its current skid. The Rebels’ next chance to end it comes Tuesday at Missouri (8 p.m., ESPN2).