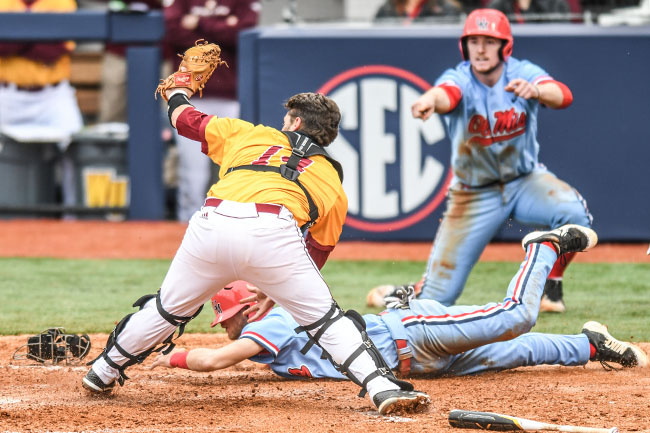 Ole Miss’ first two wins this season came rather comfortably. On Sunday, the Rebels had to sweat it out.

But a combination of high-leverage pitching and more timely hitting helped No. 9 Ole Miss finish a sweep of Winthrop. Grae Kessinger’s two-run single in the seventh broke a 1-1 tie, and the Rebels’ bullpen threw four shutout innings as Ole Miss won 3-1 to sweep its opening series for the third straight season.

The Rebels (3-0) had 13 hits in Friday’s 7-3 win and 14 more in an 8-1 victory Saturday but mustered just three in the series finale, going 3-for-16 with runners on and 1-for-7 with runners in scoring position. Ole Miss had just one through the first six innings against Winthrop ace Nate Pawelczyk, who kept the Rebels off balance by working both sides of the plate with a mix of fastballs, sliders and changeups when he was finding the strike zone.

“It takes all kinds,” Ole Miss coach Mike Bianco said. “They run out arguably their ace today, and we knew it would be a challenge. … You could see a lot of check swings, a lot of unsure swings today, and that shows you how good he really is.”

His command also eluded him at times as Pawelczyk issued six walks, one of those coming to Will Golsan to start the bottom of the fourth inning as the Rebels created their biggest threat against the right-hander. Nick Fortes followed with a single before Pawelczyk plunked Thomas Dillard to load the bases, but Ryan Olenek’s one-out sacrifice fly was the only run Ole Miss generated in the inning.

Ole Miss threatened again in the sixth when Golsan drew another leadoff walk and moved to second when the Eagles (0-3) chose to intentionally walk the left-handed hitting Tim Rowe with two outs to get to Olenek, but Pawelczyk fanned Olenek to keep the game tied heading to the seventh.

Meanwhile, Ole Miss’ James McArthur battled his own command at times and worked out of numerous jams to keep the Eagles at bay. Winthrop put a runner in scoring position in four of six innings against the junior right-hander and plated its lone run in the fourth when McArthur’s throw to third trying to nab lead runner Jake Sullivan sailed over Tyler Keenan’s head, allowing Sullivan to trot home.

But McArthur got back-to-back strikeouts of Scout McFalls and Brandon Fite to limit the damage and worked around a one-out double in the fifth and a two-out single in the sixth to end his day. McArthur walked three, throwing just 54 of his 89 pitches for strikes, but scattered just four hits and struck out seven.

“He was able to take their blows, and sometimes you’ve got to do that,” Bianco said. “Sometimes you just don’t have your best stuff and you’ve got to battle and compete, and he really did because usually he has much better fastball command than that. Today he didn’t, but he just didn’t allow them to barrel up many balls.”

Said McArthur, “I put myself in some predicaments out there throughout the day and got behind on some guys, but I’m proud of the way I could battle and get my stuff back in the zone. That was the biggest part.”

Freshman Jordan Fowler (1-0) retired Winthrop in order in the top of the seventh — one of two scoreless innings for the left-hander — before the Rebels broke through against Eagles relievers Thad Harris (0-1) and Dalton Whitaker in the bottom half of the frame. After Tim Elko (fielder’s choice) and Jacob Adams (single) moved into scoring position on a wild pitch, Kessinger chopped Whitaker’s two-strike offering off the glove of a diving Mitch Spires at shortstop with the ball trickling far enough away for Adams to score all the way from second.

“Got to two strikes, and I was just trying to move the ball anywhere possible,” Kessinger said. “A lot of offspeed was coming. He was trying to get a big strikeout, and I was able to just move the ball and find a hole. Adams was running hard the whole way, and we were able to get two across on that.

“You’ve just got to keep coming, keep playing and just find a way at the end of the day.”

Adams slid in to catch a tip of the plate with his hand just before catcher Alex Raines’ tag, a call that was upheld after review to give the Rebels the two-run lead. Will Ethridge pitched a scoreless eighth before Dallas Woolfolk sat the Eagles down in order in the ninth for his first save.

Ole Miss will continue its eight-game homestand Tuesday against Memphis. First pitch is set for 4 p.m.