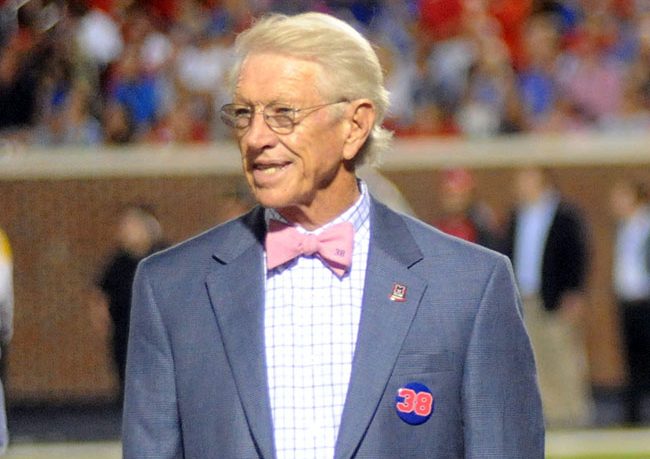 With the countless hours spent at the hospital, the numerous hour-long drives and all the emotions in between running together, Brett Brewer can’t remember exactly what he said or when he said it.

But there was a reason for his words.

Sitting among friends and family members early last week at Baptist Memorial Hospital-North Mississippi in Oxford, where his father, former Ole Miss football coach Billy Brewer, was admitted after suffering a stroke, Brett began to reminisce about his father’s time at Ole Miss, specifically his method of motivation — something Brett knows his dad needs right now.

Attitude, work habits and discipline, Brett recalled, were constantly drilled into his teams during his 22-year college coaching career and became words to live by for the 83-year-old Billy, who spent 11 of those seasons as Ole Miss’ coach after being called back to his alma mater in 1983. The second-longest tenured coach ever at Ole Miss behind his former coach, Johnny Vaught, Billy won 68 games at Ole Miss with a pair of nine-win seasons and three bowl wins in five tries.

With some help from family friends, Brett’s daughter, Bailey, made three signs containing those words and hung them in her grandfather’s rehabilitation room.

“You’ve got to practice what you preach now, that kind of deal,” Brett said Thursday afternoon. “When you’re in a place like that in a hospital and you’re fighting depression and you’re fighting an injury, I told him, ‘Look, it’s rehab. It’s just like having a knee injury. This is a brain injury. We’ve got to refocus and retrain some things now to kind of come back.’ A lot of people have to do that. It doesn’t matter what your injury is. It’s always about trying to recapture what you had before you got in here.

Brett said his father liked the signs and “understands what they were for” even if he doesn’t get to see them anymore.

That’s because Billy suffered a heart condition that’s moved him to the hospital’s Intensive Care Unit. Brett said his father’s scans, MRIs and electrocardiogram tests have all come back normal, but with Billy on several different medications, including blood thinners, doctors are monitoring him closely.

“A person his age, you have to be careful. That’s the main thing they’re trying to do is not create another issue where a clot happens,” Brett said. “There’s some things they want to do, but they don’t know if he’s stable enough to do them at this point. The main thing is to get him a little stronger and a little bit more stable and then they may can do some stuff that may can help the long-term prognosis. Right now, they don’t want to take that chance.”

The stroke that hospitalized Billy was more occipital in nature, affecting his vision and balance more than his speech and facial movements. His rehab and physical therapy sessions were going so well initially that Brett thought his father might be released to the care of sitters at home by late this week, but he suffered a mild heart attack Monday that moved him from his rehab room to the ICU.

“We’re trying to make daily gains and kind of attack one thing and not cause another,” Brett said. “That’s the easiest way I can put it. Right now, we appreciate the thoughts and the prayers of the Rebel Nation and definitely making do with that.”

Brett has split his time between Oxford and his home in Memphis ever since Billy was hospitalized while Billy’s other son, North Carolina receivers coach and former Ole Miss assistant Gunter Brewer, made the trip down last week to help care for his father. Countless friends, former players and former teammates have visited Billy, including former All-American quarterback Jake Gibbs, who played with Billy on some of Vaught’s teams in the late 1950s.

The two did some reminiscing of their own during a visit late last week.

“We talked about old times and just brought up old football and how things were going in general,” Gibbs said. “It hit me kind of listening to him, but he was speaking very nice, very good. He was walking good. You could tell he had (a stroke), but other than that, he was sitting up, was very active and had his memory.

“We’re keeping our fingers crossed, praying for him and pulling for him. Hope he gets better.”

As for those signs, Brett said they’re being kept at Billy’s home in Oxford. The family has every intention of using them again to keep Billy going.

“We didn’t throw them away,” Brett said. “When he gets back into a regular room, then we’ll put them back up on the wall.”