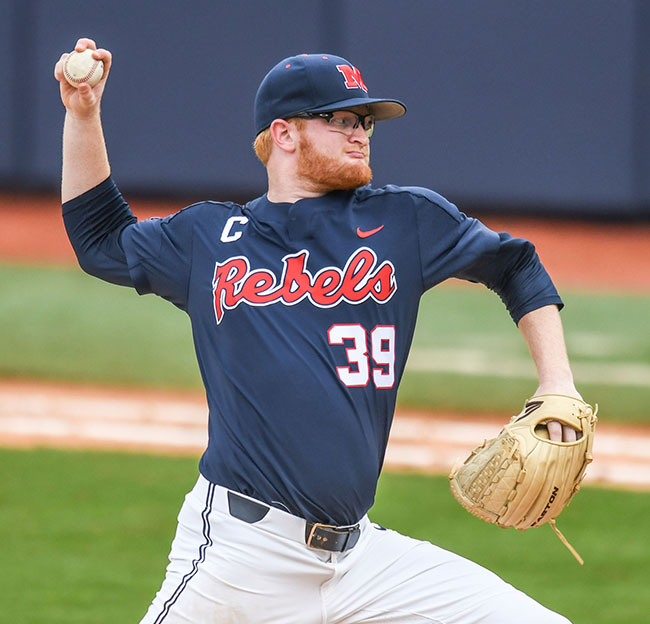 Ole Miss got its first chance to play a full game against Tulane and put together a dominant one to cap a perfect Saturday.

Brady Feigl kept the Green Wave’s bats in check before Ole Miss used a five-run sixth inning to take control of a 9-1 win late Saturday afternoon at Oxford-University Stadium. The Rebels clinched their second straight series win after holding off Tulane in the postponed opener earlier in the day.

“I don’t think it has anything to do with energy. It has more to do with the focus and are you here to play?” Ole Miss coach Mike Bianco said. “I think that’s why today I was real proud because, one, we came back and played well in the continuation of the first game, but Game 2, I thought we looked very business-like with a very mature approach at the plate. I thought we pitched it really well besides the first inning. I thought we were outstanding defensively. Thought we did a lot of things well today.”

Ole Miss (6-0) had 10 hits and 18 baserunners against six Tulane pitchers, scratching out four runs against starter Ross Massey (1-1) through the first five frames before putting the game out of reach in the sixth. Chase Cockrell, Jacob Adams and Ryan Olenek each drove in a run in the frame for the Rebels, who pushed across two more on a pair of wild pitches.

Cockrell and shortstop Grae Kessinger, who erased Ole Miss’ only deficit with a leadoff home run in the bottom of the first and added an RBI double in the fifth, each finished 2-for-3. Primarily hitting out of the leadoff spot, Kessinger has seven hits in his last 11 at-bats, raising his average to a team-best .458.

Olenek finished with two RBIs while Will Golsan also drove in a run.

The Rebels’ long at-bat in the sixth ended what Bianco called a “super dominant” outing for Feigl (2-0), who settled in after a failed pickoff attempt helped the Green Wave (3-2) take a 1-0 lead in the first on Ty Johnson’s RBI single. The junior right-hander didn’t allow another hit until the fifth and retired 15 of the final 16 batters he faced, working four clean innings with six strikeouts and no walks on 73 pitches.

The key, Feigl said, was mixing in a consistent changeup with a low-90s fastball and slider after going through the Green Wave’s lineup for the first time.

Feigl, who went 2-2 with a 4.08 earned run average in six starts a season ago after being moved from the bullpen midway through the season, has yet to allow an earned run in 12 innings this season. He’s fanned 12 and walked just one.

“I thought he was electric. Maybe the best outing that he’s had here, and that’s saying a lot,” Bianco said. “We talk a lot about how good Brady is. I thought he had three dominant pitches today, was in great counts and ahead of each batter.”

After an adventurous showing at the end of the Saturday’s first game, the bullpen kept Ole Miss’ dominance going on the mound with three innings of no-hit relief. Right-hander Parker Caracci struck out four of the six batters he faced in two innings before true freshman Max Cioffi worked a clean ninth in his Ole Miss debut.

Rowe out with injury

Tim Rowe has been held out of the lineup this weekend after recently tweaking a hamstring in practice. Rowe, who’s been splitting time between designated hitter and the outfield, won’t be available Sunday with the hope that the senior will be back in time for the Rebels’ trip to Long Beach State next weekend, Bianco said.

Rowe started each game of the opening series against Winthrop but hasn’t played since. His lone hit this season went for a three-run homer in the opener. He’s also drawn three walks.

Ole Miss falls to No. 19 Tennessee amid poor…