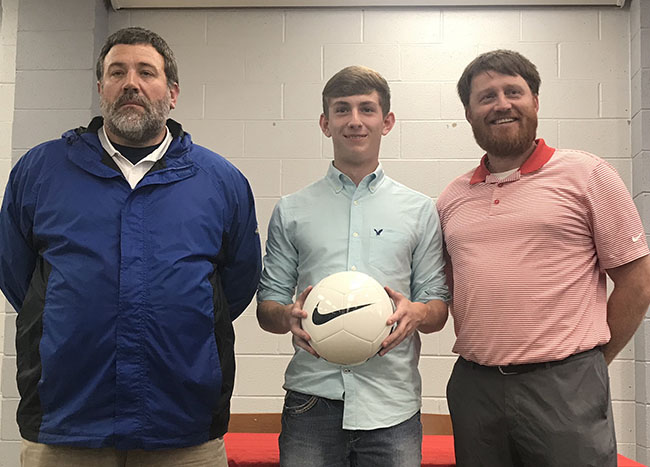 Thomas Jenkins has played soccer for two years. Not two years after taking some time away from the sport, but two years. Period.

A decision to tryout for the Commodores’ team after his sophomore year after encouragement to to so from his cousin, Lafayette place kicker Robbie Langley, proved fruitful as Jenkins made the team.

Two years later he is getting an opportunity to continue his newly-formed soccer career after committing to play at Mississippi Gulf Coast Community College as a walk-on next year.

“It feels good that I’ve put in the hard work and it’s paying off,” Jenkins said. “I was for sure wanting to play soccer (in college). I knew that from the beginning. I was pretty much committed to finding some team to play on.”

Once Jenkins made the team for his junior season the hard work immediately began. He was essentially learning how to play the sport as a beginning with players who have had years of experience under their belt from rec and travel leagues to having played at Lafayette since seventh or eighth grade.

To try and shorten the learning curve Jenkins would play anywhere he could. Whether it was with friends, on his own training or in pickup games he came across on Facebook. When it came to studying the game, Jenkins would watch his own highlight videos on Hudl to see how he could improve.

“It was hard definitely learning how to play,” Jenkins said.

Lafayette head coach Gene Anderson made the decision to find a spot for Jenkins, but it was assistant coach James Denton who made him his ‘pet project’ as Anderson described it.

Denton, a former goalkeeper, and a defensive-minded coach put Jenkins through as many grueling drills and worked him hard on the junior varsity team.

“I was really, really hard on him,” Denton said. “I’m talking about wore him out. The first summer if I hollered his name once I hollered it a thousand times. I was tough on him but he handled it.”

Jenkins became a key defender as a outside fullback or ‘wingback’ for the Commodores. After an injury caused Anderson to have to readjust his defensive scheme from four fullbacks to three, Jenkins adapted. He played nearly every minute of his senior season, being subbed out of a game against Mooreville after the score was out of hand.

“(Jenkins) started out with no experience and he was just behind everybody,” Anderson said. “We kind of had those conversations going into his senior year and just worked him really hard at practice and he put in some extra work after school. …He just kind of set his mind to it and did it.”

Jenkins hopes to get the attention of a four-year school while at MGCCC and play two more years at a Division I school. He plans to major in Nursing.

Lafayette returns to Jackson with plenty to play for