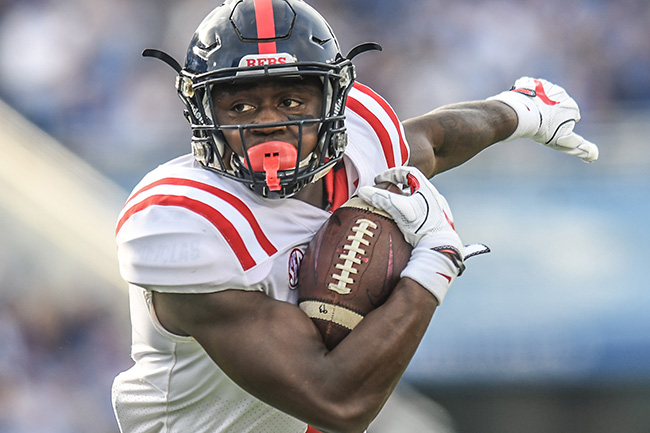 It didn’t take long this offseason for A.J. Brown to further endear himself to Ole Miss’ fan base.

Shortly after the NCAA’s Committee on Infractions handed down an additional bowl ban for next season on Dec. 1 as part of the penalties doled out in the program’s infractions case, the Rebels’ All-American receiver tweeted out a scene from the movie The Wolf of Wall Street to end any speculation that he might transfer. In the clip, Wall Street stockbroker Jordan Belfort, played by Leonardo DiCaprio, tells his employees that he’s not leaving his firm amid a financial crisis.

“It was just a little shout-out to let everybody know I wasn’t going nowhere,” Brown said. “I love this school.”

But there’s a good chance Brown’s talent will have him leaving Oxford sooner rather than later.

It’s the kind of buzz that’s impossible to ignore, but Brown said any decision about his future beyond the coming season can wait.

“I hear all that, but I just try to stay focused on what I’m doing now,” Brown said. “Just having fun with it and enjoying the process.”

The former four-star signee had a breakout sophomore season, proving to be a mismatch from any spot on the field. The 6-foot-1, 225-pound Brown lined up primarily against bigger linebackers and smaller safeties in the slot, breaking Treadwell’s school record for receiving yards in a season (1,252). He also led the SEC in touchdown receptions (11).

Size, speed and hands aren’t questions with Brown, but he admitted there are still parts of his game that need polishing. The focus heading into what could be final season with the Rebels is building endurance to help with consistency in his route running.

“Just making every route look the same. Running full speed all the time,” Brown said. “Last year, I kind of jogged on certain routes when I was tired. That’s when I messed up in games. Just trying to clean that up.”

Lafayette’s Jenkins’ decision to take up soccer pays off…