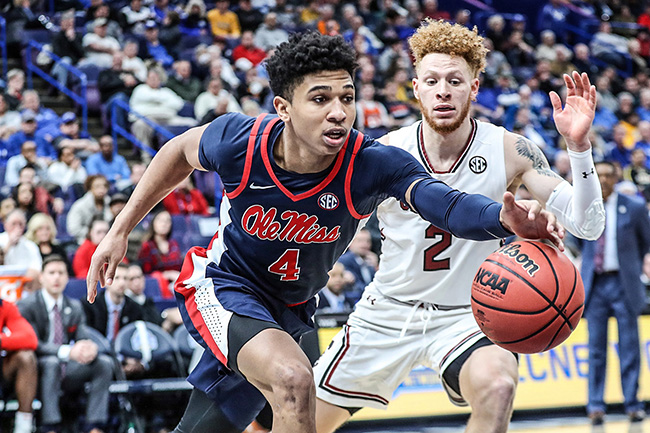 If that was an off night for Silva, then the Gamecocks are in good hands moving forward in the Southeastern Conference Tournament.

Led by Silva’s 21 points and 11 rebounds, 11th-seeded South Carolina (17-15) rallied from five points down in the second half to defeat Ole Miss 85-84 in the opening round of the tournament on Wednesday night.

“(Silva) didn’t have a lot of energy,” Martin said. “I don’t know if he didn’t sleep well or didn’t eat well. I don’t know. Maybe he doesn’t feel well. He’s too good a kid. He doesn’t tell you. He just goes out there and tries to do his best.”

The win wasn’t nearly as memorable as last year’s Final Four run for South Carolina, but it was a first step toward what the Gamecocks hope is miracle five-games-in-five-days run through the SEC that results in a second straight trip to the NCAA Tournament.

Silva was one of five players to score in double figures for South Carolina, which led by as many as nine points in the first half. Frank Booker also scored 21 points, and Justin Minaya had 16. Maik Kotsar added 14 points and Wesley Myers 10 in the win for the Gamecocks, who advance to face No. 6 seed Arkansas on Thursday.

Despite the comfortable first-half margin for South Carolina, the closing minutes were anything but secure. After falling behind by as many as five points midway through the second half, the Gamecocks used a late 16-4 run to take control — before holding off an inspired effort from the Rebels (12-20) in the closing minute.

Breein Tyree scored 18 points to lead the 14th-seeded Rebels, who lost for the 11th time in their last 12 games to end the season and finished their season without former coach Andy Kennedy.

Booker put South Carolina up 85-81 with a free throw with 13.4 seconds remaining. Stevens answered with a 3-pointer on the other end, but it came at the buzzer.

“Your coach leaves with basically four regular season games left, and it’s one of those deals that we had to try and rally around each other, stay positive, stay together, and they did a good job of that,” Ole Miss interim coach Tony Madlock said. “I’m just so proud of those guys.”