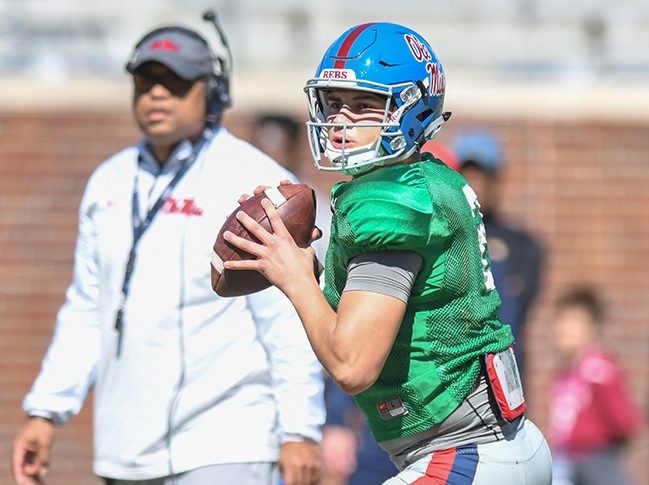 Ole Miss has six early enrollees going through spring practice. None of them arrived amid more fanfare than Matt Corral.

Corral, the incoming freshman quarterback, was the Rebels’ highest-rated signee in this year’s recruiting cycle when he inked with Ole Miss just days after flipping his commitment from Florida in mid-December. A California native, Corral was a consensus four-star recruit ranked as high as the nation’s No. 3 pro-style quarterback prospect by Rivals.com.

Now Corral is practicing with and against seasoned college players moving at a different speed while learning a new offense a semester earlier than most true freshmen. His transition is going about as expected.

“That’s what he’s doing right now from the high school game to the speed of the college game,” offensive coordinator Phil Longo said. “It’s nothing different than from any other mid-year freshman trying to get it going in the spring. We’re not helping him by slowing down. He’s got to kind of get on the train leaving town at the speed that it’s leaving. At the end of the day, that’ll be for his benefit.”

But coaches and teammates said the U.S. Army All-American has flashed the physical talent that made him one of the nation’s most sought-after prospects. The 6-foot-2, 203-pound Corral accounted for more than 11,000 yards and 123 touchdowns during his prep career at Oaks Christian School and Long Beach Poly, where he threw for 2,495 yards and 29 scores as a senior.

The most evident trait is a right arm that may already be the strongest of any quarterback on the Rebels’ roster.

“Matt Corral has a strong arm,” receiver A.J. Brown said. “He’s probably not too sure about what to do right now, but as soon as he figures that out, he’ll be a good player for us.”

It’s been an expected mixed bag for Corral through the Rebels’ first four practices. He effortlessly heaved a long touchdown pass during a scrimmage inside Vaught-Hemingway Stadium on Saturday, but decision-making and inconsistent accuracy that should improve with experience have also led to some rookie mistakes.

“I know we’ve got a couple of interceptions off of him,” defensive coordinator Wesley McGriff said with a grin.

Corral was a critical addition not only from a talent standpoint but also for the Rebels’ depth at the position following former five-star signee Shea Patterson’s transfer to Michigan. That left incumbent Jordan Ta’amu and redshirt freshman Alex Faniel as the only scholarship quarterbacks on the roster before Corral arrived.

He’s already taking most of his snaps with the second-team offense and could begin the fall as Ta’amu’s backup depending on his development between now and then. But Ole Miss’ prized recruit has made a solid first impression all things considered.

“I think maybe a little bit inconsistent through four days, but he should still be in high school,” Ole Miss coach Matt Luke said. “For him to go out there and be running with the twos, he’s made some really, really good plays. … He’s talented. He can make all the throws and has got plenty of arm strength. I just think being consistent and being accurate is important.”