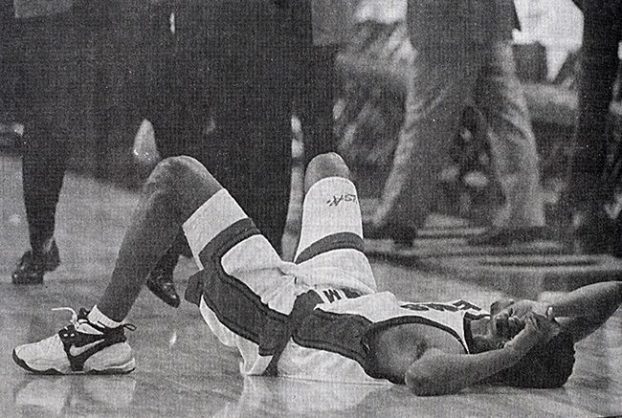 Ole Miss' Ansu Sesay lies on the court after Valparaiso's Bryce Drew made a 3-pointer at the buzzer to defeat Ole Miss 70-69 in the NCAA tournament at The Myriad, in Oklahoma City, Okla. on Friday, March 13, 1998.

Anatomy of The Shot: How Bryce Drew’s buzzer-beater happened and why it still stings for Ole Miss 20 years later

Of course, the thoughts that flood back to the minds of Carter and other players on Ole Miss’ 1998 NCAA Tournament team this time of year are too many to count. What, if anything, could the Rebels have done differently to prevent Bryce Drew’s buzzer-beater that’s become synonymous with March Madness?

The Shot, as it’s famously — or infamously, depending on which side you’re on — referred to now, turned 20 years old Tuesday, the first day of this year’s NCAA Tournament. Drew’s leaning 3-pointer, which lifted Valparaiso to a 70-69 upset of the fourth-seeded Rebels, is annually featured as part of the tournament’s television coverage as networks tease one of America’s most compelling sporting events.

There’s also the other side of the heart-stopping upsets, a stunning agony of defeat that’s still as fresh for those Ole Miss players as it was that day inside The Myriad in Oklahoma City two decades ago.

“I joke with people that I need therapy this time of year because you see it happen and see it played so many times,” said Carter, Ole Miss’ deputy athletics director for development and research acquisition and a junior forward on that team.

Led by All-American forward and future NBA draft pick Ansu Sesay, the Rebels put together one of the best seasons in program history in 1998, vaulting as high as No. 10 in the national polls on the way to their second straight SEC Western Division title. With the help of a win at Rupp Arena against eventual national champion Kentucky, Ole Miss earned the second-highest tournament seed in school history.

“I played with Sesay in the summer,” Drew said. “Obviously it was a really, really good team.”

Valparaiso was a heavy underdog but had Drew, who was courted by some of the top programs in the country after being named Indiana’s Mr. Basketball in high school but ultimately decided to stay home and play for his father, Homer Drew. The younger Drew kept Valpo close with 19 points and eight assists in the first 39 minutes and change, setting up a final sequence that will long be remembered on both sides for vastly different reasons.

‘It should’ve been Ole Miss ball’

Drew missed his first attempt to put the Crusaders ahead in the waning seconds with Sesay snatching the rebound before getting fouled with 4.1 seconds left. Sesay, a 74-percent free-throw shooter, missed the first before the elder Drew called Valpo’s last timeout to draw up one final play.

“We were anticipating Ansu making the second free throw,” Carter said. “He was our best player and made clutch shots all year. For us, we were basically just saying, ‘Hey, don’t foul. Don’t go over the back. Don’t do something careless.’”

The players returned to their spots on the court for Sesay’s second attempt, which included Carter and freshman forward Rahim Lockhart lining up across from each other in the lane to go for the rebound if Sesay missed again. He did.

The ball caromed off the back of the rim in the direction of Carter and Valpo’s Bill Jenkins, who went up simultaneously for the rebound. Both players got a hand on the ball before it went out of bounds with officials giving possession to Valpo with 2.5 ticks left.

But ask the players who touched it last, and there’s a surprising consensus.

“There’s no doubt that Bill knocked the ball out of bounds,” former Valpo guard Jamie Sykes told The Times of Northwest Indiana. “We couldn’t believe it. We just looked at each other and said, ‘Oh well, it’s our ball.’ It should’ve been Ole Miss ball.”

Just being in that position with Valpo needing to go the length of the floor in a hurry is one of those things Carter said he may always second-guess.

“Probably looking back, what we should’ve done was just taken everybody off the line and allowed them if he missed to get the rebound, let the clock start and they’ve got to do something in a hasty manner,” Carter said.

Ole Miss had one timeout remaining, but head coach Rob Evans didn’t want to give the Crusaders a chance to regroup by burning it. Sykes got to inbound from the baseline, another peculiar decision by the referees considering the ball went of bounds along the sideline in front of Ole Miss’ bench.

‘The ball literally goes right between both of us’

Ole Miss matched up man-to-man with freshman guard Jason Flanigan guarding Drew, Lockhart on Jenkins and Carter along the baseline pressuring the inbounder — a job usually reserved for the 6-foot-9 Sesay but hastily went to the shorter Carter by default since he was the closest Ole Miss player to where the ball went out of bounds. With nearly two less seconds to work with, Valpo audibled from the original play the elder Drew called during that final timeout, and Sykes got Carter off his feet with a fake before heaving a pass toward Jenkins beyond midcourt to start “Pacer,” a play designed primarily to get the ball to Drew off the pass.

“When the clock went down, we didn’t have enough time, so we switched it to a call,” said Drew, who’s now the coach at Vanderbilt. “We’d run it in practice and we ran it in a game earlier that year, and it did not work in the earlier game.”

As the pass approached Jenkins, the 6-8 Lockhart worked his way between the Crusaders’ senior forward and the ball and had a bead on a deflection. It was about that time that Lockhart noticed Sesay leaving his man in an attempt to steal the pass. Once Lockhart, who dislocated his thumb earlier in the season after a collision with Sesay, saw Sesay approaching and vice versa, both players pulled off.

“I already learned a lesson that when Su is going, let him go,” said Lockhart, who spent this season on Ole Miss’ bench as an assistant. “But this time, instead of him going to get it, he backed up and I backed up. So the ball literally goes right between both of us.”

Flanigan got caught watching all three while the ball was in the air, losing track of Drew for a split-second. That’s all the time Drew needed to sprint open on the wing, and a leaping Jenkins found him before both of his feet were back on the ground.

“When Bryce caught it, I knew it was over with,” Lockhart said.

Drew wasn’t as sure. He caught the pass in stride and stepped into what’s become one of the most memorable shots in tournament history, but Drew didn’t initially think it had enough. The dogpile that broke out on top of him a few seconds later let him know he was wrong.

“I thought it was going to be short,” Drew said. “If you go back and watch — and I went back and watched the film — it actually skidded the front rim and kind of skidded in. Thank God it got over the top of the rim to slide through.

“All I remember was basically just being on the ground and I couldn’t even feel anybody on top of me. Even though it was a big pile, I really didn’t feel anything. When I saw it on TV, I was like, ‘Wow, that’s what I did.’ Like I had no clue.”

‘Maybe that changes kind of the course of Ole Miss basketball’

Valpo advanced to the Sweet 16, which only added to Ole Miss’ agony given the way its part of the bracket opened up. Had the Rebels held on against Valpo, they would’ve met another double-digit seed in Florida State with the winner getting Rhode Island, which knocked out top-seeded Kansas, for a trip to the Elite Eight. Rhode Island, an 8 seed, finished one win shy of the Final Four after losing to Stanford.

As painful a moment as it was — and still is — for the Ole Miss players involved, not all of them think of the totality as a negative. It came amid perhaps the best stretch of basketball the program has ever seen with Ole Miss making three NCAA Tournaments in a four-year span capped by the school’s lone Sweet 16 appearance in 2001.

Lockhart isn’t sure that happens without the constant reminder of what happened three years earlier.

But it’s also Lockhart’s opinion that the 1998 team was more talented, and others wonder what a possible Elite Eight or Final Four run had Drew not gotten in the way would’ve done for the profile of a program that’s struggled to find consistent success as it relates to NCAA Tournament appearances. Ole Miss has just eight of those to its name and is in the market for a coach after Andy Kennedy resigned in February amid the program’s first losing season in 12 years.

“Maybe that changes kind of the course of Ole Miss basketball,” Carter said. “You kind of look at it a little deeper now than you did back in those days when you were just kind of a player on the team and thinking about it more on the game level. Now you kind of look back and say, ‘Wow, that was a big moment that maybe could’ve changed some things in the course of Ole Miss basketball.’”

But Carter, Lockhart and the rest of their former teammates know as well as anybody that playing the what-if game is pointless. No matter how many times they see a replay and hope for a different outcome, The Shot still goes in.

“Should we have called a timeout? Should we make some personnel changes? You replay all of that and you see kind of both sides in a lot of those situations, and you chalk it up to that’s March Madness,” Carter said. “It’s just part of what makes this three- or four-week stretch so awesome. It’s just unfortunate for Ole Miss and for us as players, our coaching staff and our fans that it happened to us, but that’s what people live for this time of year is to see those type of moments. Sometimes I think you can overanalyze it and overthink it. Sometimes you’ve just got to say, ‘Wow, that’s just one of those moments.’”

If only it were that easy.

“The wound has been healed,” Lockhart said, “but there’s a scar.”

Where is athletic director Ross Bjork in his search for Ole Miss’ next basketball coach?

Ole Miss’ men’s basketball team is heading to the SEC Tournament where, barring the unlikeliest of runs, the Rebels’ season... read more