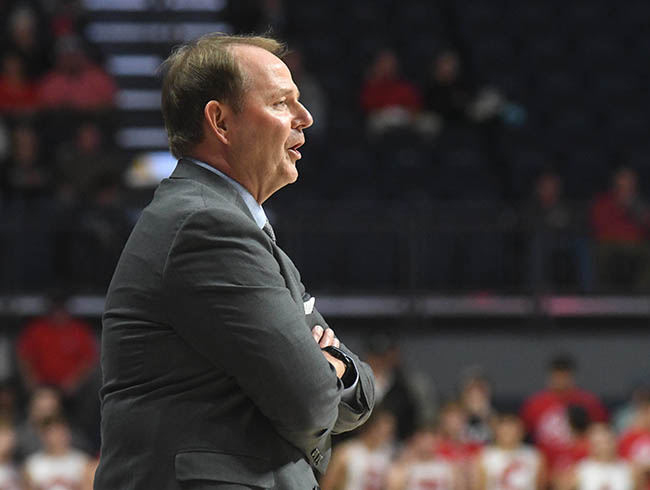 Kermit Davis being the men’s basketball coach at Ole Miss is reportedly a matter of when, not if.

Davis, the longtime coach at Middle Tennessee State who’s still coaching the Blue Raiders in the National Invitation Tournament, is expected to officially get his new title before the end of the week, ushering in a new era of Ole Miss hoops after a 12-year run by Andy Kennedy.

Once it happens, Davis’ first order of business will be assembling a coaching staff. So who might that include?

Davis’ current staff is a good place to start with Win Case and Ronnie Hamilton being the likely frontrunners to join Davis in Oxford should he decide to bring any of his assistants with him.

Having spent the last 10 seasons on MTSU’s staff, Case is Davis’ longest-tenured assistant. Case handles regional recruiting responsibilities and helps with the development of perimeter players and advanced scouting, according to MTSU’s athletics website. The former Oklahoma State standout — a college teammate of Kansas coach Bill Self — has more than 30 years of coaching experience, including head coaching stints at the junior college and NAIA levels.

Davis’ youngest assistant at 38 years old, Hamilton is in fourth year at MTSU, sharing coaching, recruiting and scouting responsibilities with Case, according to the website. He got his coaching start as an assistant at Division II Tarleton State in 2005, helping the Texans to a 70-23 record in three seasons, and has had stints at Houston, Tulane and The Citadel.

Another name that’s circulating is former LSU and Arkansas State coach John Brady, who could join Davis’ staff at Ole Miss in some capacity, according to a report from RebelGrove.com’s Neal McCready.

It makes sense given the familiarity between the two. Davis was on Brady’s staff at LSU as the Tigers’ associate head coach from 1997-2002, and Brady, a Mississippi native who signed and developed the likes of Glen Davis, Stromile Swift and Tyrus Thomas into NBA draft picks during his tenure at LSU, could use his resume and in-state ties to help boost Ole Miss’ recruiting efforts.

Another name to keep an eye on is Butch Pierre, who also has ties to Davis. Pierre, a former Oklahoma State, N.C. State and LSU assistant who spent this season as director of player personnel at Memphis, was a teammate of Davis’ at Mississippi State. His son, Joe Pierre III, has been a graduate assistant at MTSU the last two seasons.

There’s also a link between Brady and Pierre, who was an assistant on Brady’s LSU staff before finishing the 2007-08 season as the Tigers’ interim coach after Brady was fired.