What’s been the ‘best surprise’ for Ole Miss coach Matt Luke this spring? 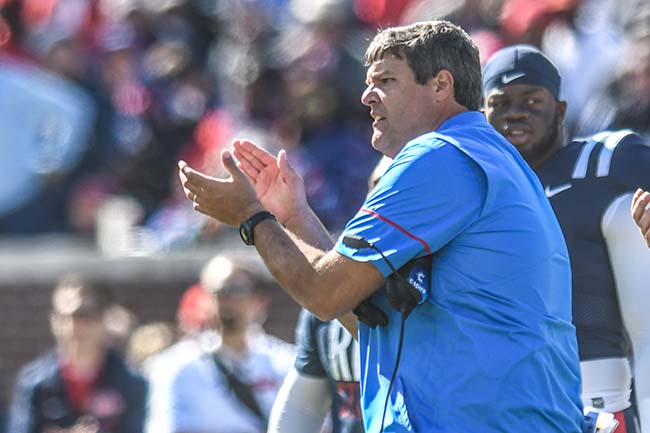 Ole Miss is just halfway through the spring, but head coach Matt Luke has been encouraged by what he’s seen at some of the Rebels’ most pressing positions.

Luke said young linebackers Josh Clarke, Mohamed Sanogo and Zikerrion Baker have “flashed” as the Rebels start the task of trying to replace both starters at the position, including leading tackler DeMarquis Gates. Octavious Cooley has taken advantage of the extra reps he’s gotten at tight end with Dawson Knox out with an injury, and the same goes for younger players filling in along the offensive and defensive lines with Sean Rawlings, Benito Jones, Qaadir Sheppard and Austrian Robinson also being held out this spring.

But the “best surprise” so far, Luke said, has been the emergence of running backs Isaiah Woullard and Scottie Phillips, who are also getting more reps with D’Vaughn Pennamon and D.K. Buford sidelined this spring with injuries.

Phillips and Woullard are both going through their first spring at Ole Miss as mid-year enrollees. Singled out by Luke as a newcomer expected to make an immediate contribution next season, Phillips has the edge in experience having already played at the junior college level — he ran for 2,282 yards and 27 touchdowns the last two seasons at Jones County Junior College — but both have flashed some playmaking ability, Luke said.

“I was cautiously optimistic about them before they got here,” Luke said. “Scottie broke another long run here at the end of (Tuesday’s) practice, so I’m really, really pleased with (running back) coach (Derrick) Nix’s room right now.”

Woullard was a somewhat forgotten member of the Rebels’ 2017 recruiting class after he grayshirted in the fall, delaying the start of his eligibility clock until this spring. The 5-foot-9 Woullard, who racked up 8,294 yards during his prep career at Hattiesburg’s Presbyterian Christian School, is the all-time leading rusher in Mississippi high school history.

Rising junior Eric Swinney is the only other scholarship back going through the spring as the Rebels search for a replacement for Jordan Wilkins, who became Ole Miss’ first 1,000-yard rusher since 2009 in his final season. That competition likely won’t start in earnest until Pennamon rejoins the fold in the fall, but Luke will continue to keep a close eye on the two newcomers.

“They’re still making some mistakes. They’ve got to keep coming,” Luke said. “And Swinney’s been solid. Swinney’s been there and knows what to do,  so we kind of know where he is. We want to see some of these new guys and what they can do.”