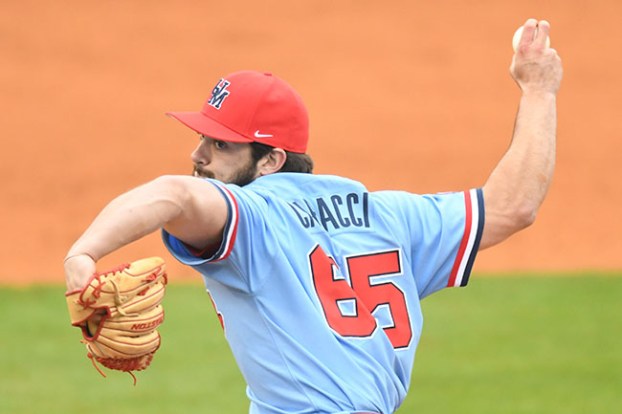 Mike Bianco had seen flashes of it before. So had Will Golsan.

But neither Ole Miss’ coach, outfielder or Parker Caracci himself saw all of this coming from Caracci, the latest arm to emerge in what’s turning into one of the deepest and most talented bullpens in college baseball. The third-year sophomore had not thrown a pitch for Ole Miss until this season but has made all of them count — none bigger than last weekend in the most hostile environment Ole Miss has been in all season at Blue Bell Park in a top-15 series against Texas A&M.

“I didn’t expect (this kind of season) this early,” Caracci said.

Bianco turned to Caracci in the eighth inning of Thursday’s opener with Ole Miss clinging to a 5-4 lead, and after two one-out singles and an error loaded the bases for the Aggies, Caracci, mixing in a slider with a fastball that reached the upper 90s, got back-to-back strikeouts of Braden Shewmake and Logan Foster, A&M’s No. 3 and 4 hitters, to escape trouble before fanning the side in the ninth. Caracci continued to fill up the strike zone Saturday, giving up a run but striking out two more to strand the tying run in scoring position in a 7-6 win for Ole Miss that clinched the series.

What stuck out to Bianco as much as Caracci’s performance was his reaction during the postgame celebration, a stoic one that usually serves relievers well in high-leverage situations.

“To be on the road and pitch in front of 6-7,000 people in a pressure-packed game of the SEC, and he doesn’t look any different than he looks like in an intrasquad game,” Bianco said. “You look at his breathing, you look at his demeanor around the mound. Even after the game, you look at him and it’s almost like … (his teammates) are all coming up hugging him and he’s almost struggling with that. He hasn’t figured that part out. That’s all right. That can come later.”

Watching Caracci carve up a potent A&M lineup took his teammates back to the previous two falls when he showed glimpses of that kind of dominance.

“I’ve thought every year he’s came in here and thrown, he’s been one of the best pitchers,” Golsan said. “He got his chance this weekend, and he showed what he could do.

“He’d work down in the zone with a 92, 95 (mile per hour) fastball and a good slider. Just consistent pitches.”

Yet vying for innings in a bullpen that included a combination of veterans (Dallas Woolfolk, Will Stokes and Connor Green) and talented youngsters (Will Ethridge, Greer Holston and Houston Roth, who has split time as a midweek starter), Caracci wasn’t consistent enough with his command for a spot on the 35-man roster his first two seasons after signing with Ole Miss out of Jackson Prep, where he was named a Louisville Slugger second-team All-American as a senior.

“I think that’s why he’s still in the program,” Bianco said. “You saw glimpses of that, but he was just too inconsistent. He’s had some good falls here but the inconsistent January and February leading up to that time where you make the decision to make the 35.”

Rather than transferring, Caracci worked with Bianco, pitching coach Carl Lafferty and strength coach Zach Boone to continue to refine his fundamentals coming off a breakout summer in which he was named the most outstanding pitcher in the Cal Ripken Collegiate League after posting a 0.69 earned run average with a league-best seven wins and six saves for the Baltimore Redbirds. Emphasizing leg drive, Caracci developed a more consistent, powerful delivery that, with the help of natural maturation and strength work, bumped his velocity from the high 80s to the mid 90s.

Through the season’s first 25 games, Caracci has been perhaps the most consistent — and overpowering — arm out of the bullpen for a team that enters a daunting week leading the SEC in earned run average (2.54) and strikeouts (253). No. 4 Ole Miss (22-3) will host No. 14 Southern Miss (17-5) on Tuesday (6:30 p.m., SEC Network alternate) before welcoming No. 5 Arkansas to Oxford-University Stadium for a Thursday-Saturday series pitting the top teams in the Western Division against each other.

“It’s just being the best that we can be,” Caracci said. “We know everybody’s going to get an opportunity, so we’re not really trying to outdo each other. We’re just trying to be there in case somebody needs us.”

Should he be needed at some point this week, Caracci will try to build on some eye-popping numbers. He’s allowed two earned runs and 14 hits in 15 ⅔ innings while racking up a whopping 33 strikeouts against just one walk.

“He’s just been lights out for us,” Bianco said.

Who will participate in Ole Miss’ Pro Day?

Ole Miss’ NFL Draft hopefuls will get their chance to work out in front of personnel leaguewide at the school’s... read more