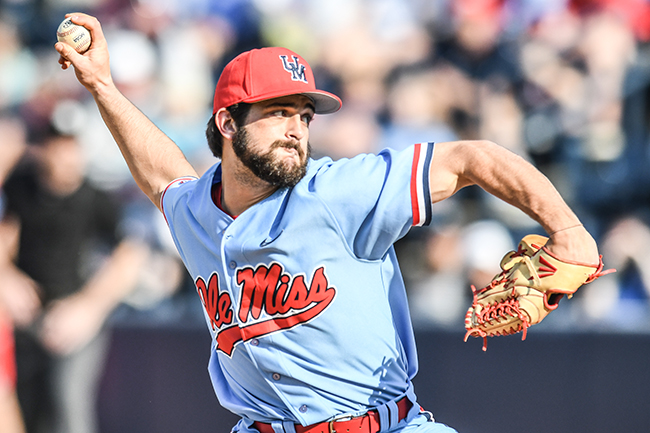 Ole Miss' Parker Caracci pitches against Arkansas at Oxford-University Stadium in Oxford, Miss. on Saturday, March 31, 2018. Caracci picked up the save as Mississippi won 11-10. (Bruce Newman, Oxford Eagle via AP)

Parker Caracci and Tyler Keenan on Monday were recognized by the Southeastern Conference for the significant roles they played in Ole Miss going 3-1 last week.

Caracci was named SEC Pitcher of the Week while Keenan was tabbed as the league’s Freshman of the Week. Keenan shared the freshman honor with LSU’s Ma’Khail Hilliard.

A third-year sophomore, Caracci continued his breakout season by saving all three of the Rebels’ wins — each of them longer than an inning. Caracci notched a five-out save in a midweek game against then-No. 14 Southern Miss before getting a combined 11 outs in saves against then-No. 5 Arkansas in the last two games of the teams’ series over the weekend. The sophomore right-hander, who has five saves in the last seven games, allowed four hits and no earned runs in 4 2/3 innings, striking out five and walking two to run his strikeout-to-walk ratio this season to 38-to-3.

Keenan, a newcomer out of Clayton, North Carolina, hit a team-best .583 last week and drove in the decisive runs in the Rebels’ 11-10 win over Arkansas on Saturday with a three-run home run in the seventh inning as part of a three-hit day. Keenan is hitting .333 on the season with four doubles, three home runs, 13 RBIs and a .449 on-base percentage.

Ole Miss came in at No. 3 in the latest polls released by Baseball America, Perfect Game and D1Baseball.com on Monday. It’s the Rebels’ highest regular-season ranking since being No. 2 in 2008.

The Rebels came in at No. 5 in Collegiate Baseball’s latest poll. The publication had the Rebels seventh a week ago.

Ole Miss’ midweek game at Memphis has been postponed from Tuesday to Wednesday because of the threat of inclement weather.