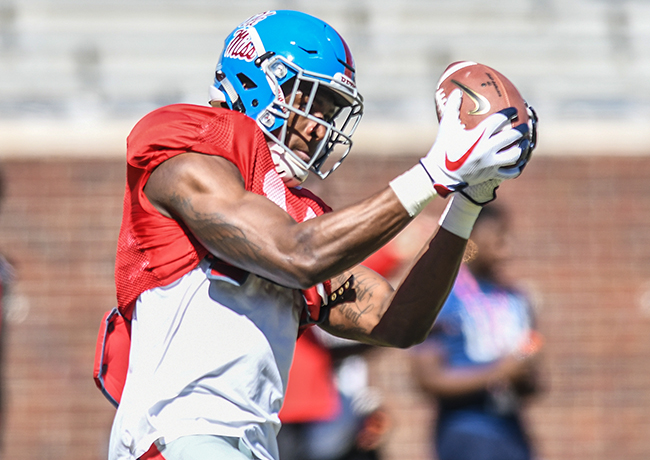 DK Metcalf’s spring is going about as expected.

“He’s been steady,” Ole Miss coach Matt Luke said. “He’s been out there every day, and he’s made a lot of big plays down the field.”

That won’t surprise anybody who’s followed Metcalf’s career to this point. Bigger than most of the defensive backs he lines up against, Ole Miss’ receiver has been producing explosive plays out wide since his days at Oxford High, but the local product is working on refining the other aspects of his game this spring while brushing off any talk about his future.

Metcalf, a redshirt sophomore, will be eligible for the NFL Draft in 2019 should he choose to declare after next season. WalterFootball.com already projects the 6-foot-4, 225-pounder as a first-round pick for the 2020 draft, which would come after his junior season, but another productive season could leave him with a decision to make after this fall.

It’s not something Metcalf said he’s thinking about much at this point.

“I just go out here and take it one day at a time,” Metcalf said.

A former four-star signee in Ole Miss’ 2016 recruiting class, Metcalf got off to fast start as primarily a red-zone target his freshman season. He caught two touchdowns in his first two games with the Rebels, but he broke a bone in his foot on the second one that forced him to take a medical redshirt.

Lining up all season alongside DaMarkus Lodge and the SEC’s leading receiver, A.J. Brown, a healthy Metcalf was part of the league’s top passing offense last fall. He finished with 646 yards on 39 catches (16.6 yards per reception) with seven touchdowns — three of those covering at least 51 yards.

Metcalf has spent time repping at both outside receiver spots this spring, continuing to produce big plays wherever he lines up. In a scrimmage open to the media last last month, Metcalf beat cornerback D.D. Bowie to haul in a catch of more than 50 yards.

Metcalf can often use his size and strength to create separation, but he’s emphasized his technique at the line of scrimmage to help with his release. The objective is to morph into a more complete receiver.

“Really just working both sides at receiver and just my hands and all the little aspects of the game,” Metcalf said.

Three years removed from high school, Metcalf now finds himself among the veterans of perhaps the SEC’s most talented receiving corps. That’s meant taking some of youngsters at the position under his wing, including sophomore Braylon Sanders and early enrollee DeMarcus Gregory, another pair of former four-star signees who could find their way into the rotation this fall and could be in line for larger roles sooner rather than later depending on what the future holds beyond next season.

“They’re doing real good,” Metcalf said. “They’re just soaking up all the knowledge they can, and they’re just using it where they can.”