Ole Miss has ‘got to be ready’ against slumping Mississippi State 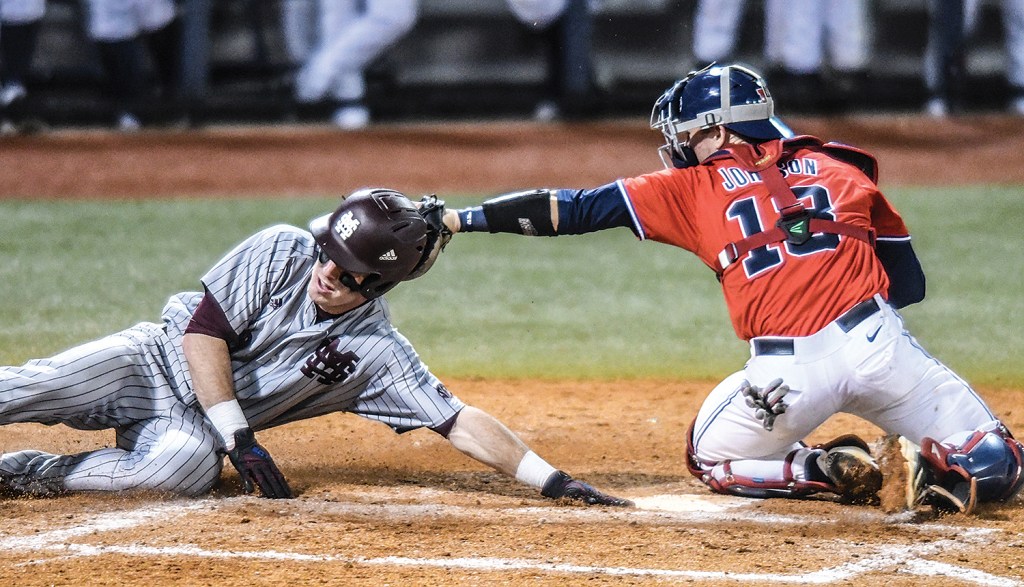 Ole Miss and Mississippi State enter the weekend with their seasons trending in opposite directions.

Having won 26 of their first 30 games, the Rebels have ascended to No. 3 in most national polls with the most wins in college baseball and sit atop the SEC’s Western Division after the first three SEC weekends having already pocketed series wins over Texas A&M and No. 5 Arkansas. Meanwhile, Mississippi State has lost as many games as it’s won through the season’s first two months and finds itself in the division cellar with just two wins through its first nine league games.

But Ole Miss’ players know better than to think pulling off an eighth straight series win will come easy when the teams renew their rivalry at Dudy Noble Field in Starkville starting today at 6:30 p.m. (SEC Network+). Saturday’s game is slated for 2 p.m. before the teams wrap up the series at 1 p.m. on Sunday.

“Anybody can beat anybody, especially in a rivalry game like this,” catcher Nick Fortes said. “They’re going to be fired up and playing harder than ever, so we’ve got to be ready.”

Ole Miss (26-4, 6-3 SEC) has yet to drop a series this season but hasn’t won a series in Starkville since taking two of three in 2014. The Bulldogs, ranked fifth at the time, took two of three the last time the teams met at Dudy Noble Field in 2016.

MSU (15-15, 2-7) was a national seed that season and made its second straight super regional appearance a season ago, but this spring has been a trying one for the Bulldogs amid abnormal circumstances. Andy Cannizaro abruptly resigned one weekend into his second season as Mississippi State’s head coach after what Cannizaro said were “some poor decisions” in a statement released as part of an official announcement made by the school in late February.

MSU athletic director John Cohen has not addressed the specific reasons for Cannizaro’s resignation. The Bulldogs are 15-12 under interim coach Gary Henderson.

“I just think they’ve been through a lot and are a team that’s trying to figure it out like the rest of us,” Ole Miss coach Mike Bianco said.

MSU has had one of the more consistent rotations in the SEC led by ace left-hander Konnor Pilkington (1-4, 2.61 earned run average), who will oppose right-hander Brady Feigl (6-1, 2.23) in tonight’s opener after Bianco reshuffled the Rebels’ rotation this week. Left-hander Ryan Rolison (3-3, 3.63) will make his first Saturday start of the season against MSU’s Ethan Small (2-2, 2.41) while right-hander Jacob Billingsley (2-2, 3.73) will oppose Ole Miss’ James McArthur (4-0, 2.38) on Sunday.

The issue for Mississippi State has been scoring enough runs to back its arms. The Bulldogs are tied for 178th nationally in batting average (.256) and ranks last in the SEC in home runs (15) with junior outfielder Jake Mangum (.328) being the only starter hitting above .300 for an offense that’s scoring just 4.6 runs per game.

Meanwhile, Ole Miss, one of three teams in the SEC hitting .300 or better, has seven regulars hitting that mark. Designated hitter Chase Cockrell leads the way with a .391 average. Outfielder Thomas Dillard has hit safely in 18 of the last 19 games while Ryan Olenek enters the weekend with six straight multi-hit games.

The Rebels also have last season’s series as added motivation. MSU swept Ole Miss at Oxford-University Stadium a year ago and has won the teams’ last five meetings by a combined eight runs.

Ole Miss is preparing for the same kind of competitiveness in the latest rendition of the rivalry regardless of what this year’s numbers may indicate.