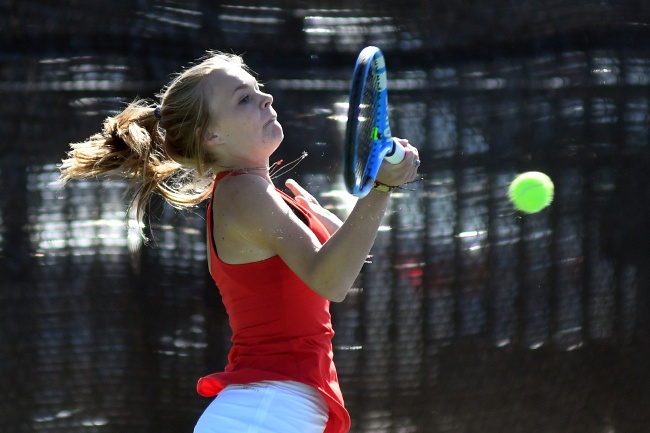 It was a unique situation for Lafayette before Monday’s first round match. Without one ball was struck the Commodores already held a 2-0 advantage over Ridgeland. That was due to the Titans coming to Oxford short-handed and having to forfeit both boys’ doubles matches.

Lafayette took full advantage, winning 6-1 and advancing to the second round of the Class 5A state playoffs. They will play the winner of the Center Hill-Cleveland Central match, which is being played on Wednesday.

“They did what I wanted them to do,” Lafayette coach Debbie Swindoll said. “Particularly in both girls’ doubles. We needed to solidify and get those two wins and we were challenged in singles, which was good. …to me it was an ideal situation for us in the first round of playoffs to just kind of see where we are.”

In the singles’ matches Lafayette suffered their only loss as Manuel Lopez-Wolff lost to Ridgeland’s Darius Kent 3-6, 4-6. Ally Bowen defeated Kent’s sister Kasey 6-1, 6-0 to win the girls’ singles point while under the weather.

“Ally’s doing what Ally does,” Swindoll said. “Even with a cold she’s doing what she normally does. …I wanted to see what (Wolff) can do under pressure and I think there is a lot more to him but he hadn’t really played any competition until now.”

In mixed doubles William Smith and Lilly McElreath won 7-5, 6-4 to clinch the final point of the afternoon.

Oxford routs Warren Central to advance in 6A playoffs