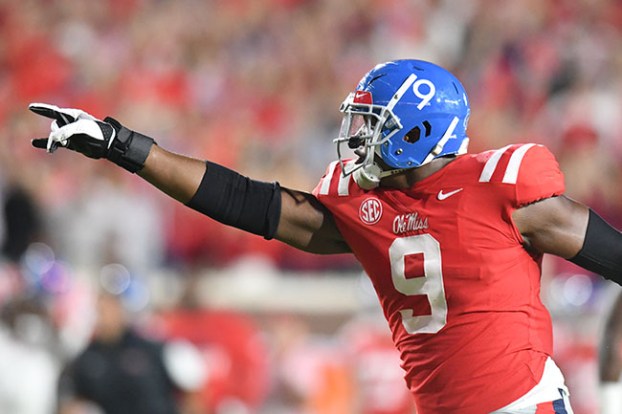 If there’s a more underrated defensive player heading into next week’s NFL Draft than Breeland Speaks, the sport’s most veteran analyst hasn’t seen him.

The draft will begin April 26 at AT&T Stadium in Arlington, Texas, and Mel Kiper Jr. thinks Speaks will easily be the first Ole Miss player to come off the board when it does. Speaks likely won’t be picked on the first day of the three-day draft — only the first round will be held next Thursday — but Kiper doesn’t think Rebels’ former defensive lineman will have to wait long to hear his named called on the second day, predicting Speaks will be taken in the second or third round.

“He can do anything you want,” said Kiper, ESPN’s lead draft analyst. “I look at underrated players and I look at the defensive linemen, he is the most underrated. He’s the guy I’m the most excited about.”

Mock drafts vary as to how much NFL teams like Speaks, though many of them are in line with Kiper’s opinion. Walter Football has Speaks going to the Detroit Lions in the third round with the 82nd overall pick in its latest mock draft while NFLDraftScout.com, which ranks Speaks as the 94th-best draft-eligible player, has Speaks heading to the Dallas Cowboys in the fourth round with the 116th pick.

Kiper, who’s been an analyst for ESPN since 1984, said the reason for his opinion of Speaks is his versatility as a 6-foot-3, 287-pounder as well as the production that flashed late in his college career. Speaks moved to defensive end midway through last season after spending his first two years at Ole Miss on the interior and was a disruptive force off the edge, racking up career-highs in tackles (67), tackles for loss (8) and sacks (7).

It’s the kind of production that finally matched the hype with Speaks, who signed with Ole Miss as a four-star recruit out of Jackson’s Callaway High in 2015 but didn’t have more than 32 tackles or 5.5 tackles for loss in either of the previous two seasons after redshirting. Kiper said the lack of consistency could give some teams pause but added teams could be getting a player that’s just starting to tap into his potential.

“When you get the production to match the talent, that’s what he showed,” Kiper said. “You didn’t know what his talent would be in terms of computer numbers. We found that out at the combine, and he tested great. … It’s only one year of production. He went from one sack to seven sacks this year, but I’ll roll the dice with a Breeland Speaks in the second or third round.”

Kiper said he could see Speaks adding more weight as an end in a 3-4 defense or sliding inside as a 3-technique in a 4-3 scheme depending on how a team wants to utilize a skill set that starts with rare athleticism for a player his size.

“He’s just so quick and gets upfield so easily,” Kiper said. “Enormous upside.”

Speaks said after his workout at Ole Miss’ pro day last month that most teams view him as an interior linemen, adding he’s comfortable playing either spot.

Getting to the quarterback was Marquis Haynes’ specialty at Ole Miss, and Kiper doesn’t see that changing at the next level.

Haynes had at least seven sacks each season with the Rebels and finished his career as the program’s career sack leader in the modern era (since 1983) with 32. Kiper said not being able to round out his game over his four years in Oxford will likely drop the 6-2, 234-pound Haynes to the latter rounds of the seven-round draft despite his burst off the edge.

“I think when you look at him, he’s an early Day 3 guy, maybe late Day 2,” Kiper said. “Rushing the passer is something everybody wants, and Haynes has shown that capability when he’s been at his best.”

Kiper said he viewed running back Jordan Wilkins as a late-round pick who “can play in this league and get the job done.” Wilkins rushed for 1,011 yards as a senior, becoming Ole Miss’ first 1,000-yard rusher since 2009, but said last month he’s focusing on pass protection in an effort to become a more complete back.

Who to watch at this week’s North Mississippi Classic

Oxford is getting its first professional sporting even this week with the inaugural North Mississippi Classic being played at the... read more