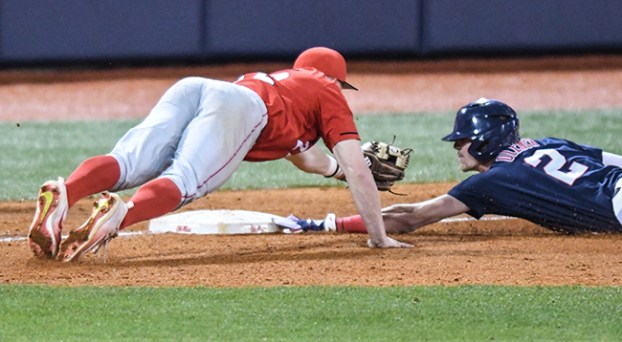 Ole Miss’ offense has been accustomed to racking up hits and runs in bunches this season.

But in a low-scoring series opener against Georgia on Friday, it was the Bulldogs who came up with one more timely hit.

Tucker Bradley’s RBI single in the ninth inning sent No. 23 Georgia to a 3-2 win at Oxford-University Stadium, spoiling one of the better starts from Ole Miss’ Ryan Rolison this season in the Rebels’ third straight one-run loss. The 11th-ranked Rebels will need to sweep Saturday’s doubleheader starting at 1:30 p.m. to avoid their third straight series loss.

“I think it’s just the way baseball goes sometimes,” said shortstop Grae Kessinger, who accounted for half of Ole Miss’ run total with his third home run of the season. “We won a lot of these early, and it hasn’t fallen our way the past few games. I don’t think the confidence is wavering.”

Ole Miss (30-9, 8-8 SEC), which entered the night with the SEC’s second-highest average in league play (.305), finished with a season-low in runs on just seven hits with most of the struggles coming against Georgia’s Chase Adkins, who kept the Rebels off balance with more offspeed pitches than Friday-night starters in the SEC usually throw. Adkins scattered four hits over six innings while striking out two and walking two and retired 10 straight before Kessinger’s solo home run in the sixth tied it at 1.

“Thought we just struggled with the plan,” Ole Miss coach Mike Bianco said. “The right-handers early in the game really struggled to stay back and hit the breaking pitch to right field. … You’ve got to tip your hat to Adkins. It was just a terrific night for him.”

Rolison spent much of the night matching Adkins pitch for pitch. The left-hander kept Georgia (27-11, 10-6) scoreless over his final six innings of work after allowing Aaron Schunk’s RBI single in the first to match his longest outing of the season, scattering five hits and working around four walks to strike out six before Keegan McGovern’s leadoff double chased him in the eighth.

“(Rolison) had that little swagger to him tonight where they weren’t going to hit him,” Kessinger said. “When he’s like that, no one’s going to touch him.”

Georgia took a 2-1 lead on Schunk’s sacrifice fly off Will Ethridge, who threw just six pitches before giving way to Parker Caracci in the ninth. Caracci entered in a tie game after Thomas Dillard singled home Ryan Olenek, who extended his hitting streak to 17 games, in the bottom of the eight, but Georgia regained the lead four batters later on Bradley’s RBI knock back through the box before Schunk retired the Rebels in order in their final at-bat.

Caracci allowed two hits and a walk in his only inning of work and has allowed multiple baserunners in 10 of his last 11 outings.

“Those in-game battles that we were so good at early in the season that make all the difference in the world in a game — a pitch here to get off the field, a play or a big at-bat — we haven’t done enough of the last few days,” Bianco said.

After a grind of a first round Braden Thornberry had a little bit easier time around the course on Friday... read more