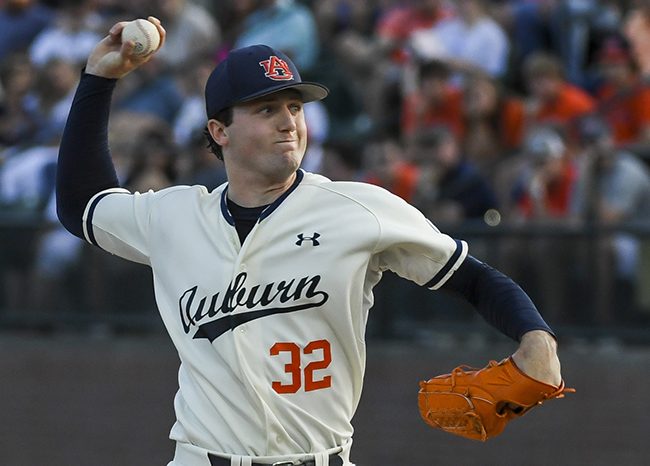 It will be a day later than expected, but Ole Miss will soon get another shot at Casey Mize.

Mize will be the headliner for No. 19 Auburn when the sixth-ranked Rebels host the Tigers in their finale home series of the season beginning Thursday at Oxford-University Stadium (6 p.m., ESPNU). It’s an important three-game set for both teams as they try to stay relevant in the national seed conversation with just two league series left before the SEC Tournament later this month.

Ole Miss (36-13, 13-11 SEC) and Auburn (35-14, 13-11) enter the weekend a game back of Arkansas atop the Western Division standings. Arkansas is the favorite among the trio to be a national seed with an RPI of 5 and a 16-8 mark against the RPI top 50, though the Razorbacks have the toughest finish with series against Texas A&M and No. 16 Georgia still remaining.

Ole Miss would keep its national seed hopes alive with a series win this weekend while leaving itself a steep hill to climb should it drop two of three if recent history is any indication. Only one SEC team since 2002 — South Carolina in 2012 — has been a national seed without having 20 league wins counting the SEC Tournament.

Baseball America and D1Baseball.com both have the Rebels as the No. 8 overall seed — the final national seed — for the NCAA Tournament while Auburn is the No. 9 seed in Baseball America’s most recent projections. Ole Miss, which, unlike Arkansas and Auburn, has an RPI outside the top 10 (11), will end the regular season with a series at Alabama, which owns the SEC’s worst record, while Auburn will host LSU next weekend.

“You can’t hide the kids from it, but hopefully they know that’s not the recipe for success, to scoreboard watch, look at RPIs and look at regional projections,” Ole Miss coach Mike Bianco said. “Nobody knows what’s going to happen in two weeks. At the end of the day, the best thing you can do is to reach those goals is to have success and to play well. Fortunately for us, we’ve done that a lot more than we haven’t.”

Auburn comes in winners of 12 of its last 15 games with arguably college baseball’s top arm in Mize (9-2, 2.25 ERA), who’s widely projected to be the No. 1 overall pick in this year’s MLB Draft. With a fastball that sits in the mid-to-upper 90s and advanced command of a hard splitter, Mize has racked up 119 strikeouts and walked just seven in 84 innings this season while holding opponents to a .167 average. The 6-foot-5 right-hander matched a single-game school record with 15 strikeouts in a complete-game victory over Vanderbilt his last time out.

Like most aces, Mize holds down the Friday-night spot in Auburn’s rotation, but with this weekend’s series starting a day earlier, Auburn coach Butch Thompson told the Montgomery Advertiser he’ll hold Mize for the second game of the series in order to give him the normal amount of rest between starts. Mize dealt with arm fatigue late last season that caused him to miss a handful of starts, including one against Ole Miss.

The Rebels ended up facing Mize in last season’s SEC Tournament. Mize threw six innings in relief in Auburn’s 5-4 opening-round win, limiting Ole Miss to three hits while striking out nine but leaving the Rebels with a plan of attack this time around that’s easier said than done against Mize’s three-pitch mix, which includes a slider.

“I think you need to attack his fastball early and not let yourself get deep in the count because then you’re falling victim to his strengths,” catcher Nick Fortes said. “If he’s got you down in the count, he feels like he’s at the advantage.

“We’ve got to maximize our opportunities. If we get a runner on third with less than two outs, we’ve got to cash it in because you don’t get many opportunities like that against a guy like him.”

Sophomore right-hander Davis Daniel (3-3, 5.28) will get the ball for Auburn in a series opener that now takes on even more importance for the Rebels, who are looking for a bounceback performance from Ryan Rolison (6-4, 4.13). The sophomore left-hander is coming off his shortest outing of the season in which he allowed season-highs in hits (10) and earned runs (8) in the Rebels’ blowout loss at South Carolina on Friday.

The same could be said for Brady Feigl (7-4, 4.28), who didn’t fare much better against the Gamecocks on Saturday. Feigl allowed eight runs on seven hits in just 3 ⅓ innings and will oppose Mize on Friday, needing a much sharper effort to keep the Rebels in it against perhaps the best pitcher the SEC’s second-ranked offense will see all season.

“You need a performance from your guy,” Bianco said. “If you put an inning together or some at-bats together and make him really work for his outs and try not to have any really bad at-bats where he just cruises, you can run that pitch count up. Then you compete on the other side where you put a lot of pressure on them because they’re having trouble scoring and you’re in one of those games where anybody can win.”