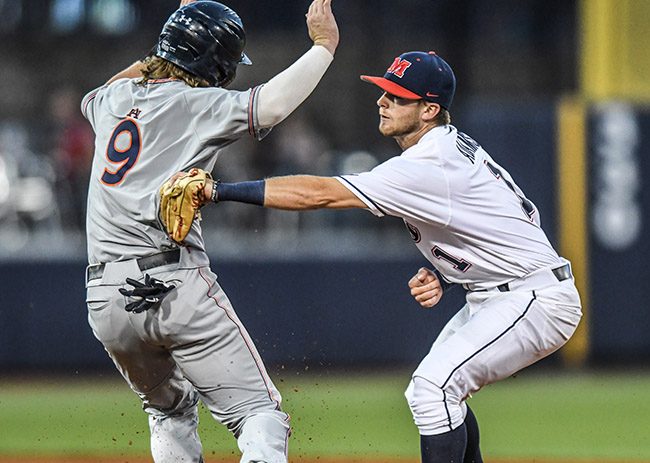 Ole Miss Jacob Adams (1) tags out Auburn's Luke Jarvis (9) and throws to first for a double play at Oxford-University Stadium in Oxford, Miss. on Friday, May 11, 2018. (Bruce Newman, Oxford Eagle via AP)

Ole Miss is a virtual lock to be one of the top 16 seeds in next month’s NCAA Tournament.

If the Rebels take care of business over the next week, chances are good they’ll also be a national seed, which would put them in position to host a super regional should they win their regional. Fresh off a win at Arkansas State on Tuesday, the Rebels woke up Wednesday morning as a consensus top 8 seed in the latest tournament projections.

Baseball America and D1Baseball.com each have the fifth-ranked Rebels pegged as the No. 6 overall seed. Perfect Game had Ole Miss as the No. 10 seed in its latest projections released Thursday, but that was before Rebels swept Auburn — the outlet’s No. 8 overall seed at the time — over the weekend to keep pace with Arkansas in the SEC’s Western Division.

Ole Miss (40-13, 16-11 SEC) is a game back of the Razorbacks (36-15, 17-10) atop the division standings entering the final weekend of the regular season. On paper, the Rebels have the easiest series left at Alabama, which owns the worst record in league play at 7-20 and has already been eliminated from SEC Tournament contention, while Arkansas has to travel to No. 16 Georgia, which is also in the mix for a national seed.

Ole Miss would win the West with one more win than Arkansas this weekend after taking two of three from the Razorbacks in late March. Both series begin Thursday at 6 p.m.

A series win over the league’s last-place team is also something the Rebels need to solidify their national seed hopes without leaving themselves major work to do next week in Hoover. Two wins in Tuscaloosa would clinch a top 4 seed in the SEC Tournament while a sweep would put the Rebels on the cusp of locking up a national seed.

Another clean weekend would give Ole Miss 19 league wins, though only one SEC team since 2002 has earned a national seed without 20 league wins counting the conference tournament. A top 4 seed in the SEC Tournament would give the Rebels a bye into the double-elimination portion of the bracket and guarantee them multiple chances to pick up at least one more win to feel good about it depending on how the selection committee views their body of work.

Ole Miss would be the No. 3 seed in Hoover if the tournament started today, but a series loss to Alabama would put the Rebels in jeopardy of falling out of the top 4 unless Georgia sweeps Arkansas, which would give Ole Miss the Western Division title in that scenario. The top 2 seeds are awarded to the division champions while the other 10 teams that qualify are seeded based on best records in league play.

In the event Ole Miss drops two of three to the Crimson Tide and Arkansas wins once in Athens, South Carolina, which took a series from Ole Miss earlier this month, could send the Rebels to the No. 5 seed with a series win at Texas A&M. The tournament’s bottom eight seeds will start in the single-elimination portion of the bracket Tuesday.