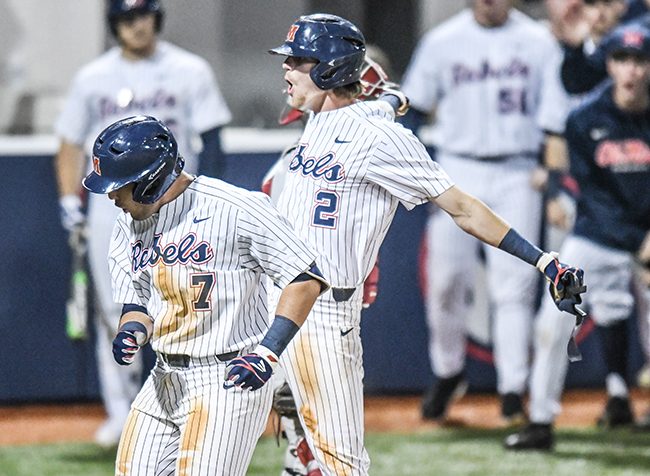 Ryan Olenek isn’t unlike many athletes in his desire to have success. It’s consumed him for most of his career.

That hasn’t always been a good thing.

Ole Miss’ outfielder came into his junior year known more for his versatility in the field than his offense. Not that his bat didn’t necessarily play at third base, shortstop or any spot he may have manned in the outfield his first two seasons — he hit .265 as a true freshman and .272 last season — but those results didn’t match his expectations.

It was hard for him to hide the times he was hard on himself. The frustration that came with what he viewed as failure showed in his body language that occasionally gave way to outbursts.

“Last year and the year before, I was just so results-oriented,” Olenek said. “It was a pretty immature mindset.”

Olenek’s perspective began to change last summer playing in the ultra-competitive Cape Cod League when he hit .283 for the Hyannis Harbor Hawks. The pressing stopped and he started letting the game come to him, which, in an ironic twist, has carried over to result in one of the most productive seasons in the SEC this spring.

“It helped me realize what baseball was all about,” said Olenek, who’s now the Rebels’ everyday right fielder. “Just having fun, doing what you can and controlling what you can. It’s made it a lot easier on me mentally.

Olenek is vying for the league’s batting title. His .396 average is 13 points higher than Florida’s Jonathan India entering the final weekend of the regular season, which starts Thursday for all 14 teams with the SEC Tournament looming Tuesday.

Olenek is second in the league in hits (76), third in doubles (17) and leads Ole Miss (40-13, 16-11 SEC) in on-base percentage, all of which are either a career-high or on pace. Even with a slightly torn labrum he suffered halfway through the league slate, he’s been at his best against SEC arms with a league-best .451 average in conference play, a mark he’ll try to improve on when the fifth-ranked Rebels start their series at Alabama (26-17, 7-20).

“It’s hard for me to remember somebody that’s had that great of a year, especially offensively in our conference,” Ole Miss coach Mike Bianco said. “People have put up great numbers, but his numbers in the SEC when you’re playing the best competition is just off the charts.”

Olenek’s breakout season has included a 23-game hitting streak, the third-longest in program history. Olenek had multiple hits in 17 of those before it ended with an 0-for-4 night against Auburn in the series opener last weekend, but some of that newfound perspective laced his words when asked if he was disappointed to see the streak come to an end.

“I lined out two or three times, so it never really felt over,” Olenek said. “My swing and the way I’m seeing the ball, whether you have hits or not, it’s baseball. I was just very fortunate to have balls land, and then in that 0-for-4 they just weren’t. That’s just how it goes.

“It was fun while it lasted. People always say don’t cry because it’s over, smile because it happened. I’m just really blessed to be able to experience what I experienced.”

An SEC batting title would be a rarity for an Ole Miss player — it’s happened just six times with former All-American David Dellucci being the last to accomplish the feat with a .410 average in 1995 — but Olenek said it’s not of the utmost importance. Not when his team is still vying for its first SEC Western Division title since 2014 and a national seed in the NCAA Tournament.

“It’s not really about me. It’s about us,” said Olenek, who’s also a finalist for the Ferriss Trophy, which is annually awarded to the top college baseball player in Mississippi. “A big we and little me. That’s what we’ve been taught here, and I think that’s honestly what I can credit my success to this year is just having great teammates, being a great teammate and trying to help us win ballgames.”

It’s that maturity that his coach believes has had as much to do with Olenek’s newfound level of success as anything.

“It’s a team concept and whatnot, but he handles his emotions a lot better when he doesn’t have success,” Bianco said. “Even when he lost the hit streak over the weekend, you wouldn’t have known the difference when he ran off the field. That’s tough. But I think that’s a big part of it.”