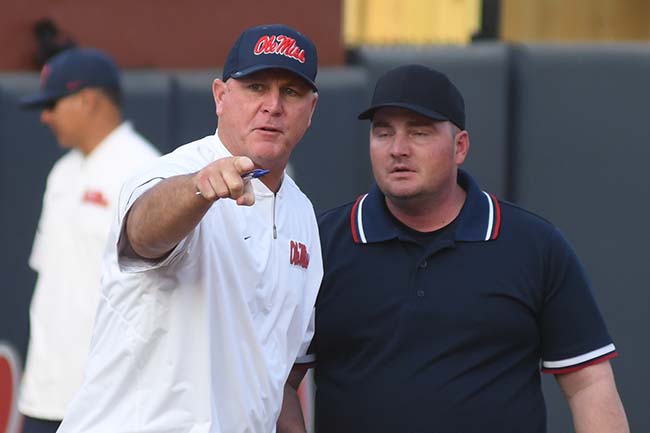 Ole Miss is in the NCAA Tournament, which means what the Rebels have done to this point doesn’t matter.

The Rebels are starting over out west, where they’ll begin the Tempe Regional tonight with a 6 p.m. CT matchup against Long Beach State (42-12). Host Arizona State, the No. 8 overall seed, will take on New Mexico State in the late game with the winners advancing to play each other Saturday for a spot in the regional finals.

Ole Miss (30-23) is looking to rekindle some of its postseason magic last season that accelerated expectations for a program that’s making its third straight NCAA Tournament appearance. But a year after hosting and winning its first-ever regional before finishing two wins shy of the Women’s College World Series, Ole Miss nearly missed out on the postseason after an inconsistent regular season.

Ole Miss has one of the best wins in the country over Oregon, the tournament’s No. 1 overall seed, as part of a 23-6 mark in the non-conference, but the Rebels struggled in the ultra-competitive SEC, losing seven straight league series before taking two of three from a top-10 Georgia team to wrap up the regular season.

Ole Miss bowed out of the SEC Tournament in the first round with a 4-1 loss to LSU its last time out. That left the Rebels with just seven league wins, a sub-30 RPI and an antsy wait when the tournament field was announced Sunday night.

“I was definitely getting nervous because we weren’t getting called on those first couple of (selections) and it was like, ‘All right, how much longer?’” outfielder Kylan Becker said. “We got called right in the middle, so after that, I could relax.”

Said pitcher Kaitlin Lee, “We’re super excited to get the opportunity to go play some more ballgames. Our season hasn’t ended yet.”

If the Rebels want to give themselves a legit shot at extending it for at least another week, they’ll have to improve the suspect defense and spotty offense that have plagued them all season. Ole Miss is last in the SEC in several offensive categories, including average (.261), slugging percentage (.364), on-base percentage (.334), RBIs (192) and total bases (514).

Ole Miss is averaging 4.2 runs, though the Rebels have had chances for more throughout the season with the baserunners they’ve produced. Ole Miss ranks third in the league in stolen bases (80), but getting the timely hit has been rare.

“We get people on base and get them in scoring position,” Becker said. “We just need that ball to fall and to get the runs in.”

It’s made it hard for Ole Miss to keep up with a defense that’s given the opposition extra outs that have routinely turned into big innings. The Rebels, who allowed at least six runs nine times in league play, own a .967 fielding percentage with 54 errors, third-most in the SEC.

“If you look at our scoresheets, most of the teams are scoring their runs in one inning,” catcher Autumn Gillespie said. “That’s where our defense just has to come together and help our pitchers out.”

The postseason comes with heightened stakes that can result in players trying to do too much, but Smith is hoping the Rebels’ experience on this stage will help with that. Lee pitched all but one of the Rebels’ postseason games a season ago while more than half of the starting position players have played in a regional.

“The only ones that really haven’t experienced it are our freshmen,” Smith said. “It’s really trying to calm their nerves, but they’ve played in the SEC and the SEC Tournament where we’ve played in front of 2,000 fans. It’s not going to be anything different.”

Ole Miss has also seen Arizona State before should a rematch unfold in Saturday’s winner’s bracket. The teams met in the same round in the Oxford Regional a year ago with the Rebels pulling out a 2-0 win.

“It gives us a sense of calmness,” outfielder Elantra Cox said.

But the Rebels first have to get past a Long Beach State team that finished runner-up in the Big West Conference as they start fresh in the postseason.

“They’re good and we know that we’ve got to come out ready,” Smith said. “If we play like we did against Georgia, we’re going to be fine. I think our team has a new attitude.”