No. 4 Ole Miss falls to No. 21 Auburn, faces elimination in SEC Tournament 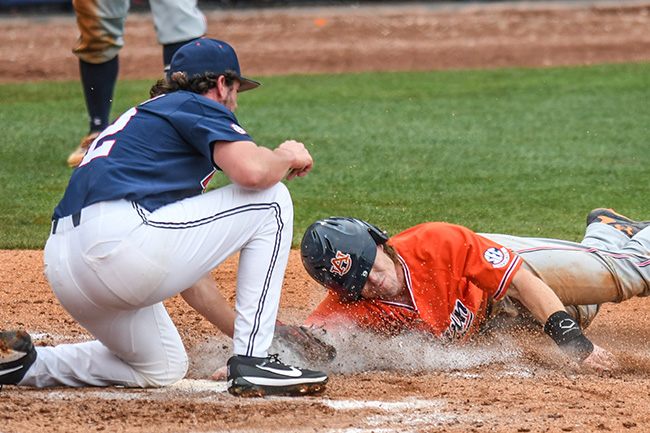 Ole Miss' Ryan Rolison reacts after getting a strikeout for the 3rd out in the 6th inning against Auburn at the SEC Tournament at the Hoover Met in Hoover, Ala. on Wednesday, May 23, 2018. (Bruce Newman, Oxford Eagle via AP)

There’s no doubt postseason baseball is returning to Oxford for at least one weekend next month. Ole Miss is trying to make sure there’s a chance it lasts longer than that.

In order to do that, the Rebels may need another win now that they’re facing elimination in the SEC Tournament.

No. 24 Auburn found its stroke against Ole Miss’ bullpen, scoring all of its runs in its final three at-bats to send the fourth-ranked Rebels to the loser’s bracket with a 9-3 win Wednesday at Hoover Metropolitan Stadium. Ole Miss (42-15) will face Georgia (37-18), a 7-0 loser to Texas A&M earlier in the day, in an elimination game Thursday at 9:30 a.m.

Brady Feigl will get the ball for Ole Miss, which may need a win to feel good about its projected national seed for the NCAA Tournament. Baseball America had the Rebels, who have nine top-25 RPI wins, as the No. 6 overall seed while D1Baseball.com pegged Ole Miss as the No. 7 seed entering this week. As one of the tournament’s top 8 seeds — a distinction Ole Miss hasn’t had since 2005 — the Rebels would host a super regional should they win their regional.

Ole Miss looked like it might add a 10th top-25 win against the Tigers (37-17), whom the Rebels swept during the regular season May 10-12 in Oxford. The Rebels had the early advantage in a pitching duel between Ryan Rolison and Auburn’s Tanner Burns when a two-out throwing error by Auburn shortstop Will Holland plated a pair of runs in the third to give the Rebels a 2-0 lead.

Auburn didn’t get its first hit until the sixth when the Tigers put their first runner in scoring position against Rolison, who turned in his fourth quality start in his last five outings and his second straight against Auburn. After allowing two earned runs over 6 ⅓ innings against the Tigers on May 10, Rolison allowed one hit, walked three and struck out six through the first six innings before back-to-back singles from Edouard Julien and Jay Estes ended his day with one out in the seventh

“Really I was just trying to stay within myself, hit my spots, fill up the zone as much as I could and let my defense work behind me,” Rolison said. “That was really my objective going in.”

Ole Miss’ lead was gone two batters later when Conor Davis drove a bases-loaded double to the gap in right-center off Greer Holston (2-1). A wild pitch later in the inning put Auburn in front when Luke Jarvis slid in just ahead of Holston’s tag.

Will Ethridge came on and got the final two outs of the inning, but Houston Roth inherited a one-out, bases-loaded jam in the eighth after Ethridge walked three of the first four batters he faced in the frame. Estes greeted Roth with a two-run double just inside the third-base line to extend Auburn’s lead to 5-2.

Holston, Ethridge and Roth combined to allow 10 baserunners in the final 2 2/3 innings, five of those coming on walks.

“Those three guys that came in just didn’t command it enough,” Bianco said. “We walk eight people, and you can’t win walking eight people on a big field like this. There’s no excuse for that.

“Probably the only guy that did his job today was Ryan Rolison. Other than that, we really struggled.”

That included trying to solve Burns (6-4), who held the SEC’s top-ranked offense to one earned run on six hits while walking two and fanning three in matching his longest outing of the season. The freshman right-hander allowed just one extra-base hit before Grae Kessinger chased him with a double in the eighth.

“He was going in and out,” Olenek said. “You usually don’t see pitchers doing that a lot in this league, but he’s got a firm fastball and we just weren’t catching up to it. And then he would spin us (with offspeed) and keep us off of it.”

Olenek got the Rebels closer with a sacrifice fly off Calvin Coker, but Coker retired the next three batters to strand Kessinger at second before Auburn blew it open in the ninth after a bit of controversy.

Auburn loaded the bases with no outs against Roth before the right-hander got Brett Wright to hit a tapper back to him. Roth threw home to start a 1-2-3 double play, but catcher Nick Fortes never got a throw off after Josh Anthony clipped Fortes’ foot while sliding into home.

Umpires ruled the slide was legal since Anthony didn’t leave the baseline, and two batters later, Julien belted a two-out, two-strike grand slam to the opposite field that put Auburn well on its way to a second straight tournament win over the Rebels, whose national seed hopes are a bit murkier heading into Thursday.

“I’m excited to see how we respond to this,” Bianco said. “We’ve responded all year long after bad outings or when we’re not playing well, and I expect we’ll do the same.”