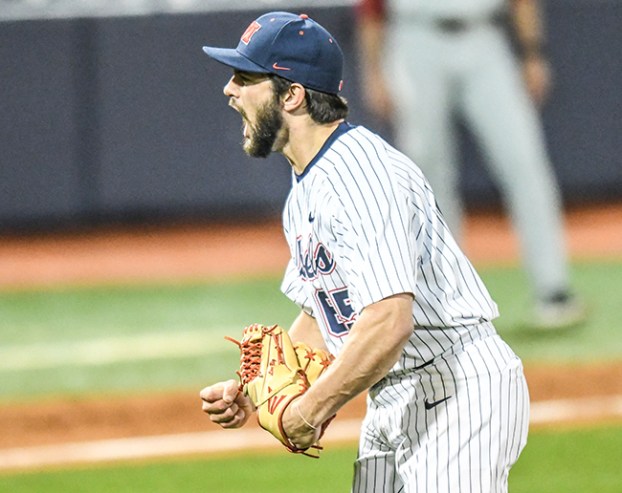 Ole Miss pitcher Parker Caracci celebrates after striking out the side in the 9th inning to pick up the save against Arkansas at Oxford-University Stadium in Oxford, Miss. on Friday, March 30, 2018. Ole Miss won 5-4. (Bruce Newman, Oxford Eagle via AP)

HOOVER, Ala. — Parker Caracci wasn’t made available for a postgame interview, so there was no explanation from him. So his coach tried to explain it away as reasonably as he could.

“I don’t really have the answer for it except for there’s just immense pressure in that moment. As a human being, you watch it and you think, ‘Wow, that’s crazy,’” Ole Miss coach Mike Bianco said. “And there’s a guy that lives it every Friday, Saturday and Sunday.

Anybody tuned in to No. 4 Ole Miss’ elimination game against No. 7 Georgia in the SEC Tournament on Thursday saw one of the more head-scratching blunders of the college baseball season. Trying to preserve the Rebels’ 3-1 lead after giving up back-to-back hits in the eighth, Caracci, who came on for Brady Feigl in the seventh and worked multiple innings for the 16th time this season, looked like he had done just that after getting two strikeouts and a tapper back to him.

But instead of flipping to first for the final out, Caracci threw home, a bizarre decision considering there wasn’t a forceout at the plate with just two runners on. Caracci’s throw sailed high of catcher Nick Fortes and to the backstop, starting a carousel that allowed both runners to score.

“The first thing is you’re just curious as to what was going through his head, but you never know,” outfielder Thomas Dillard said. “Baseball is just a tough game, a weird game. Some things are going to go through your head, and sometimes the game may speed up on you.”

Ole Miss eventually rallied to pick up its sophomore reliever on Tim Rowe’s walk-off single in the 10th for a 5-4 win that kept the Rebels alive for at least one more day in Hoover, but Caracci’s decision had both sides wondering aloud afterward.

“I’ve seen a pitcher throw home with two outs before, but I don’t think I’ve ever seen a result like that in that time of the game,” Georgia coach Scott Stricklin said. “When the game gets going fast in big situations, it’s emotional. It’s stressful. There’s a lot of things going through these kids minds. It’s a tough play. You hate it for the kid.”

LJ Talley, who was on third when Caracci fielded Aaron Schunk’s comebacker, broke for the plate on contact. He also guessed that Caracci had a mental lapse when he saw Talley out of the corner of his eye.

“The obvious play is to go to first, but I guess by breaking toward home plate, I just kind of freaked him out and he threw home,” Talley said. “We caught a break. It is what it is.”

Schunk got all the way to third on the error, and Stricklin said he figured a wild pitch was coming from a rattled Caracci that would’ve given the Bulldogs the lead. But Caracci came back to strike out 3-hole hitter Keegan McGovern on three pitches before working a clean ninth to send the game to extras.

“One of the amazing things about that is he struck out their best hitter after that and got off the field,” Bianco said. “That’s who he is. He can handle it and not let it blow up on him.”

Said Rowe, “It was a big situation, but Parker did a good job of flushing it. We just stayed within ourselves. We knew we could bounce back from it, and that’s what we did.”

Georgia eventually took the lead on Talley’s solo home run in the top of the 10th, but Caracci retired the next three batters before finding a spot along the railing in Ole Miss’ dugout to anxiously see if his offense could bail him out.

Once Rowe plated Dillard with the winning run minutes later, Caracci hopped over that railing to join his teammates in their on-field celebration as the most relieved person inside Hoover Metropolitan Stadium.

It’s a play that won’t soon be forgotten, but they were more than happy to help Caracci turn it into a footnote.

“After the game, he came up to me, gave me a big hug and said he loved me,” Dillard said. “He knew that he didn’t have the performance he wanted to have today with the mental error there, but he knows that we have a really good offense and that if he makes a mistake we’ll be there to back him up, so it was a great feeling to get a big hug from him after the game.”

Turns out Terence Davis won’t start his professional career early. Davis withdrew his name from the NBA Draft and will... read more