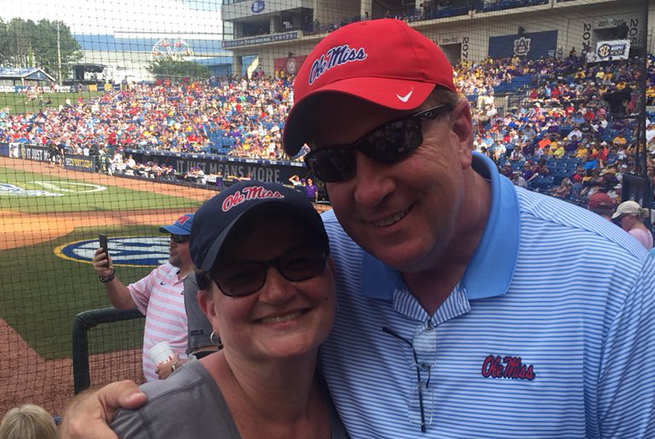 In his job as the ‘Voice of Ole Miss,’ David Kellum has one rule for himself and his family during his 10-month season with the Rebels; do not plan any major events.

But, sometimes, life happens, as was the case last week when the long-time Ole Miss radio broadcaster’s daughter, Staci, got married. The only problem? The SEC baseball tournament was ongoing in Hoover, Alabama, while Staci was getting married in Oxford.

During a Christmas party last December, Kellum was benched by Ole Miss head baseball coach Mike Bianco who overheard Kellum discussing his daughter’s wedding and its conflict with the tournament. For the winningest coach in Ole Miss baseball history there was no question what needed to happen.

“(Bianco) said, ‘well, you don’t need to do that. You skip the whole week and be with the family,” Kellum said. “At that moment in time, I knew that I was out. If the coach has given you the time off, you might as well do that.”

A plan was put in place for Kellum to sit out the week and be a dad while Richard Cross stepped in for play-by-play radio duties in Hoover.

As the week progressed, Kellum kept up with the games by television and through radio by listening to Cross call games with Kellum’s baseball broadcast partner Keith Kessinger. However, with wedding duties calling, Kellum never made it through an entire game, though he still went back late at night and scored the game in his infamous scorebook.

During one tournament game, as Kellum and his future son-in-law, Luke, were setting up for the wedding, he heard Cross’ voice echoing through the building but could not locate the source. Finally, he discovered Luke — a big Ole Miss baseball fan himself — was listening to game via the phone in his pants pocket.

“He wanted to know the score as much as anybody,” Kellum said laughing. “So, we put the phone wide open on speaker so we could listen. I kind of kept following him around so I could know what was going on.”

On May 26, Staci and Luke’s wedding day, the ceremony was set to take place at 11:30 a.m. — 30 minutes before Ole Miss’ semifinal game against Texas A&M would begin.

Kellum, however, had already decided the day was about his daughter and not the Rebels.

“I can’t listen to a radio in a church,” Kellum said. “I was just going to have to chill.”

The radio wasn’t needed as people in the crowd kept Kellum up to date on the score, including the wedding officiant, Fish Robinson. Even during the reception, Kellum said he stayed away from his phone.

“I had one Ole Miss fan after another saying ‘do you now what the score is? It’s 2-1,” Kellum said. “I didn’t need to flip it on because they were all telling me.”

The Rebels went on to defeat Texas A&M, advancing to their fifth SEC Championship game appearance and with the plan already in place for Cross to broadcast the full week, Kellum was going to miss Sunday’s championship game from the booth.

He did not miss the game as a fan.

Kellum and his wife got some tickets, piled in the car and headed to Hoover on Sunday morning.

In 1977, Kellum called his first baseball game for the Rebels. During that season, the SEC Tournament was held at Swayze Field, and Kellum called the game as Jake Gibbs led the Rebels to the first of three SEC titles. Fast forward to Sunday and Kellum, in his fortieth year as Ole Miss’ radio announcer, took in his first SEC title game from the stands.

Before the game, Kellum went up to the broadcast booth to see Cross and Kessinger. During the game, he sat with his wife in seats behind Ole Miss’ on-deck circle, surrounded by other Rebel fans.

“I’ve never been that close. I’m always in a pressbox away from the closeness of the action,” Kellum said. “I saw what fans normally get to see. I never get to see that. The emotion of striking out. The emotion of getting a big hit. I mean I’m just going up and down emotionally watching this game. It’s a lot less pressure in a booth.”

With baseball being all about superstition, and an ‘if it ain’t broke, don’t fix it’ mentality, some have already asked Kellum if he would stay away from the headset for a second week as the Oxford Regional begins on Friday.

“Ross Bjork has banned me from the SEC Tournament for next year already,” Kellum said. “He said ‘you know you can’t do the tournament next year. Richard may have to be the voice of the SEC Tournament.’ I reminded Ross that ‘I did bring you nine runs (Sunday).'”

But on Friday, Kellum will be back in his usual spot, calling plays on the radio for Rebel fans as Ole Miss faces St. Louis at 6:30 p.m. in the first round of the Oxford Regional.