A year after taking its lumps, Ole Miss’ sophomore class fulfilling potential in pursuit of Omaha 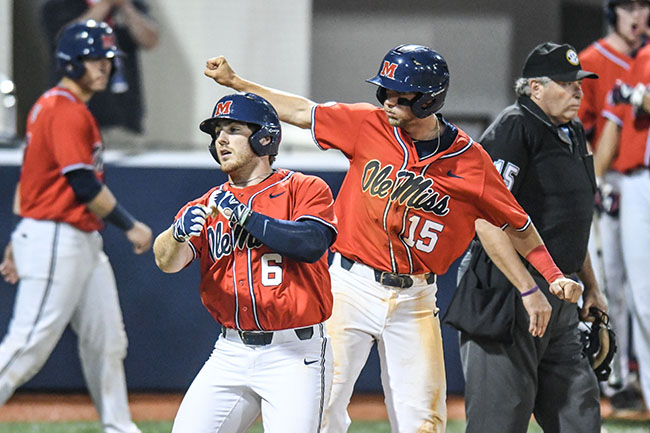 Pitching nearly 200 miles from Swayze Field, Ryan Rolison still got a taste of it.

The Rebels’ ace came on for a rare relief appearance in the SEC Tournament championship game Sunday against LSU and walked the first batter he faced to load the bases with one out in the sixth inning. Two batters later, Rolison was a strike away from keeping the Rebels’ 3-1 lead intact as many of the Ole Miss faithful packed inside Hoover Metropolitan Stadium did their part to help will Rolison out of the jam, clapping as they simultaneously rose to their feet.

They roared when Rolison blew his next fastball past Hal Hughes. Rolison pumped his fist before walking off the mound to a thunderous ovation from the portion of the 14,126 in attendance cheering the Rebels on to what turned into a 9-1 romp.

“With our fan base behind you,” Rolison said, “it just sends adrenaline through you.”

It’s the kind of postseason atmosphere Rolison always envisioned as one of the headliners of Ole Miss’ heralded 2016 signing class, particularly at Oxford-University Stadium. The same goes for fellow sophomores Grae Kessinger and Thomas Dillard, who grew up watching regionals and super regionals at Swayze Field before ending their prep careers at Oxford High.

It will become a reality this weekend when the Rebels begin the Oxford Regional against Saint Louis on Friday at 6:30 p.m. Should Ole Miss win the double-elimination tournament, it will host a super regional needing two wins to advance to the College World Series.

“Our group coming in, we knew this is where we wanted to be,” Kessinger said. “To put ourselves in position to set our own path to Omaha and being here at Swayze, we believe we can do it.”

It’s the eighth time during the Mike Bianco era that the Rebels have hosted a regional and the second (2005) the road to Omaha will go through Oxford, a level of success Rolison, Kessinger, Dillard and other members of the nation’s No.1-ranked recruiting class two years ago were brought in to help the Rebels reach again. 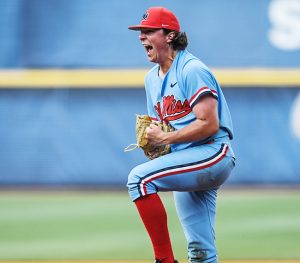 Ole Miss’ Ryan Rolison reacts after getting out of a one-out, bases-loaded jam in the 6th inning against LSU in the championship game of the SEC Tournament at the Hoover Met in Hoover, Ala. on Sunday, May 27, 2018. (Bruce Newman, Oxford Eagle via AP)

Rolison, who’s widely projected to go in the first round of next week’s MLB Draft, moved into Ole Miss’ weekend rotation early last season. The slick-fielding Kessinger stepped in immediately at shortstop, Dillard’s bat earned him a spot in left field, Cole Zabowski played in 39 games with 24 starts at first base, and catcher Cooper Johnson platooned with Nick Fortes, but the group took its lumps in the ultra-competitive SEC, particularly at the plate.

Rolison settled in and posted a 3.06 earned run average in 19 appearances (10 starts) with 64 strikeouts and just 24 walks in 61 ⅔ innings, but Zabowski’s .239 average was the highest among the freshman regulars. Ole Miss hit an SEC-worst .253, went 14-16 in league play and missed out on the postseason for the first time since 2011.

“At times, I think we leaned on them too much,” Bianco said before the season. “Left them out there and probably not the best move by me.”

That experience has paid off this spring. Kessinger is hitting .304 out of the leadoff spot, Dillard leads the Rebels in home runs (13) and RBIs (56), and Zabowski sports a .308 average for the SEC’s top offense complemented by a glove that earned him a spot on the SEC’s All-Defensive team.

Rolison (9-4, 3.79 ERA) has fought command of his low-90s fastball at times this season, but he’s combined it with a plus curveball and a developing changeup to strike out 107 in 90 ⅓ innings while holding teams to a .239 average.

“So proud of the other guys that came in with my class,” Rolison said. “Last year not making the tournament and this year bouncing back and kind of stepping into that leadership role of setting the meter high that we’re going to be a national seed, we’re going to win each game and try to make our way to Omaha.” 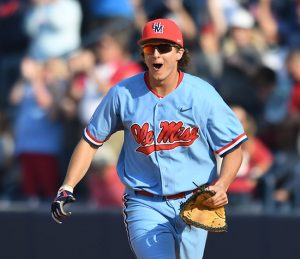 Others have carved out roles. Oxford native Houston Roth (4.53 ERA in 14 appearances), who pitched 4 ⅓ innings of one-run ball in the SEC Tournament title game, has been a versatile arm as a starter or reliever. Will Ethridge (3.83 ERA in 49 ⅓ innings) and Greer Holston (35 strikeouts in 32 ⅔ innings) have emerged with Parker Caracci as the top bullpen options.

With veterans like Fortes, Will Golsan, Ryan Olenek and Brady Feigl already in place, it all came together to help produce a record number of regular-season wins, Ole Miss’ first SEC Western Division championship since 2014, the first league tournament title since 2006 and a No. 4 national seed — the highest in program history.

“Not only our recruiting class but everyone before us and after us, I think it shows how we really just stuck with it and ended up winning in Hoover,” Dillard said. “Now we got a national seed. It’s awesome.”

Should Ole Miss win Friday, it would be the Rebels’ first NCAA Tournament victory since their run to the College World Series four years ago. There’s plenty of motivation to get back there for a group that’s starting to fulfill its potential.

“Especially after last year, we didn’t perform, our class especially, in the way that we wanted to,” Kessinger said. “To just come out this year the way we have, it’s just been fun. … We don’t plan on stopping any time soon.”