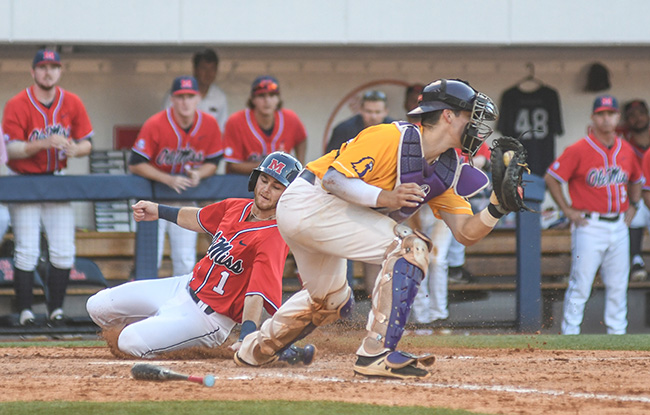 Tennessee Tech pushed Ole Miss to the brink Sunday. Now the teams meet again with a super regional berth on the line.

Ole Miss will take on the Golden Eagles in the Oxford Regional final today at noon at Oxford-University Stadium. The Rebels (48-15) held off Tennessee Tech (50-10) for a 9-8 win in the teams’ first meeting to clinch its spot in the final before the Golden Eagles eliminated Missouri State late Sunday night to earn the rematch.

Check back here for updates throughout the game.

Tennessee Tech has to beat Ole Miss twice in order to win the regional. If necessary, a second game would be played tonight at 6.

The Rebels, who improved to 30-4 at home with Sunday’s win, have won six straight and need one more for their first super regional appearance since 2014. The Oxford Regional winner will take on Texas, which won the Austin Regional, in a best-of-three super regional this weekend.

Top 9th: Tennessee Tech has added on with three hits and five walks. Olenek comes on to pitch and walks in a run before getting an inning-ending double play. 15-5 Tennessee Tech

Bottom 8th: Ole Miss loads the bases for its biggest threat against Roberts before Cooper Johnson gets the Rebels on the board with an two-run single to right to chase Roberts. Nick Osborne loses Dillard’s fly ball in the sun that would’ve ended the inning, allowing another run to score, before Zabowski follows with a two-run single to right.

Freshman Grant Phillips plunks Golsan and walks Keenan to loaded the bases. Tech ace Travis Moths, who threw 90 pitches two days ago in a start, is coming on. Moths strikes out Rowe on three pitches to limit the damage. 10-5 Tennessee Tech.

Bottom 7th: Roberts works another clean inning. He’s scattered four hits, struck out three and has yet to walk a batter.

Top 7th: Green works around a walk and a two-out single to put up a zero.

Top 6th: Tech adds to its lead with four straight hits to start the inning. Will Stokes is done, and Connor Green is coming on. Green allows a walk and a single before getting a 6-4-3 double play to strand two more baserunners. 10-0 Tennessee Tech.

Bottom 5th: Three flyouts make up the third clean inning for Roberts, who’s got his longest outing of the season in just his second career start.

Bottom 4th: Dillard laces a two-out single to right and moves to second when Nick Osborne’s throw behind him gets past Chambers at first, but Zabowski grounds out to end Ole Miss’ first real scoring chance.

Top 4th: Garza leads off with a single, but Fortes throws him out try to steal. A lineout and a strikeout end Tech’s half of the frame.

Bottom 3rd: Jacob Adams’ two-out single is Ole Miss’ first hit of the day. Nothing comes of it as Roberts induces an inning-ending flyout from Kessinger.

Top 3rd: Another leadoff walk for McArthur. Collin Harris follows with a bloop single down the right-field line, and Alex Junior gives Tech an early lead with a single to right. Brennon Kaleiwahea adds to the lead with an RBI knock to left. McArthur gets a strikeout for the second out, but Chase Chambers slices a double down the left-field line to pad the Golden Eagles’ lead.

Will Stokes comes on for McArthur and gives up Tech’s fifth hit of the inning to Trevor Putzig to score another run, but Thomas Dillard throws out a runner at the plate for the third out. 4-0 Tennessee Tech.

Bottom 2nd: Another clean inning for Roberts, who gets back-to-back strikeouts of Cole Zabowski and Will Golsan to end the inning.

Top 2nd: A replay of the first inning as McArthur’s second leadoff walk is erased by a 4-6-3 twin killing. David Garza flies out deep to center for the third out.

Bottom 1st: Ethan Roberts, getting his first start of the season, retires the Rebels in order.

Top 1st: James McArthur issues a four-pitch walk to start, but it’s erased on a 4-6-3 double play. A flyout ends Tennessee Tech’s half of the inning.