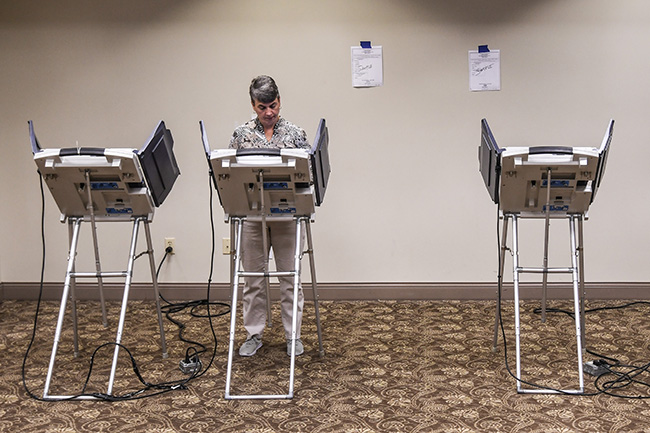 On Tuesday evening, voters at the Jackson Avenue Center found themselves without a wait.

Traditionally one of the busiest voting precincts in Lafayette County, several voters were surprised that the usual 10 to 15-minute wait at the former JCPenney storefront was nonexistent as Mississippians went to the polls to cast their ballots for the party primaries in the Class 1 U.S. Senate race.

“I was surprised when I got here today,” Oxford resident Vicki Joyner said. “When I first pulled up I thought I was in the wrong place. Normally there are campaign workers with signs, but there was no one out there today.”

Mosley added that only 178 absentee ballots were filled out prior to the election.

“I think maybe (the low turnout) is the primary and people just don’t realize that we have to weed out the candidates now to have the best choice in November,” she said.

Despite the low turnout, those who cast ballots in Lafayette County were decisive regarding the winners for the two races as incumbent U.S. Senator Roger Wicker defeated Richard Boyanton with 84.36 percent of the vote. Wicker advances to the Nov. 6, 2018 general election as the Republican party nominee.

Wicker’s opponent in the November election will be determined by a runoff on June 26 between Democratic candidates Howard Sherman and current Mississippi Minority House Leader David Baria.

However, in Lafayette County, Baria earned a dominating victory with 62.78 percent of the vote compared to Sherman’s 19.20 percent.

Tuesday’s polling also saw the first use of electronic poll books in Lafayette County, something which proved a resounding success among poll workers in at least one voting precinct, Mosley said.

“I can only speak to my personal precinct, but they were singing the praises of the electronic poll books because they were making things move a lot faster,” Mosley said. “We chose this election to deploy them because it was going to be a small election … the election commission has been training people for the past four weeks on the poll books and we knew there would be some hiccups. There were, but we talked them through it and everything went relatively smooth.”