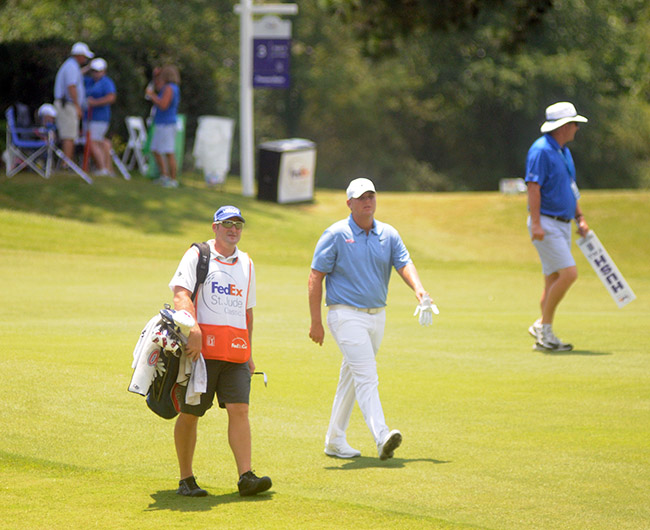 Braden Thornberry and his caddy, Matthew Achatz, walk down the fairway of the second hole during Sunday’s Final Round of the FedEx St. Jude Classic. Achatz is staying on the bag for the Ole Miss golfer’s first appearance in a major championship.

In 2008 the world was witness to one of the greatest U.S. Opens in its history. Tiger Woods and Rocco Mediate went the distance, needing an 18-hole playoff to decide the victor with Woods being that man.

10 years later one member of that group is returning to the nation’s national championship after a year off. Mediate’s caddy Matthew Achatz will be on the bag for Braden Thornberry after caddying for the Ole Miss golfer last week during the FedEx St. Jude Classic in Memphis.

The pair got together after Thornberry’s caddy for the Web.com Tour’s North Mississippi Classic in Oxford, Don Donatello, was unable to be on the bag in Memphis. Donatello knew Achatz was currently looking for a bag after his regular guy, Jim Herman, was sidelined for the rest of the season due to an injury.

The original plan was for Achatz to caddy at TPC Southwind but with Thornberry playing in the U.S. Open sectional qualifier last Monday the pair decided to get a head start on the week to get a feel for one another.

“I’m just happy to be a part of the team,” Achatz said after Sunday’s final round of the St. Jude Classic. “He’s a great kid. It was really cool to get the call to do the Open qualifier. Now to get to go to the Open with him, awesome.”

Thornberry finished inside the Top-10 to qualify for his first career major championship. The easy decision was to ask a man who had plenty of U.S Open experience to stay on the bag for one more week in Southampton, New York.

It was a successful partnership last week with the sectional qualifier and then finishing tied for 26th in Thornberry’s second start at the St. Jude Classic. With only seven days of getting to know the former NCAA Champion, Achatz was blown away by what he saw for four days in Memphis.

Since 2008 at Torrey Pines Achatz has been to a handful of U.S. Opens since but has never been on the bag for one at Shinnecock Hills, the site of this week’s Open. It will be a first for both caddy and player as Braden has never played a round at Shinnecock either.

This will also be Achatz first time caddying for an amateur and for a player who is competing in their first U.S. Open.

“It will be very cool, very special,” Achatz said.

Thornberry will tee off on Thursday in the first round at 1:09 p.m. CT.