Why Dallas Woolfolk needed to walk away from Ole Miss’ baseball team, and why the process of finding himself again isn’t as dark as it used to be 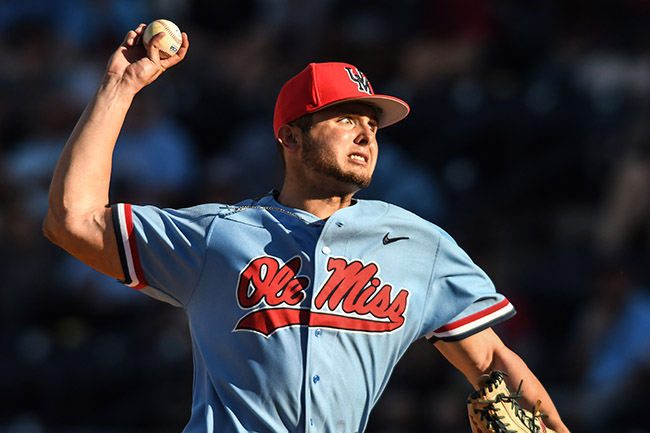 On the final day of Major League Baseball’s First-Year Player Draft, Dallas Woolfolk was grinding through another workout, part of a routine that’s become a necessity.

But he kept his phone close just in case.

A number Woolfolk didn’t recognize called in the middle of it, but he answered knowing the opportunity that might be on the other end. An area scout with the Oakland Athletics had a question for him.

The A’s provided it, drafting Woolfolk in the 13th round. He joined other draftees last week at the team’s spring training facility in Arizona awaiting his first professional assignment, which will most likely come with the Vermont Lake Monsters, the club’s Class A short-season affiliate.

“It was probably one of the happiest moments of my life because I didn’t really care about the money or where I went,” said Woolfolk, who signed for $50,000. “I just wanted the opportunity and a door to be opened.”

The euphoric moment came less than a month after a decision that would’ve seemed inconceivable for Woolfolk a year earlier. Woolfolk said he didn’t hear from any teams until getting the call shortly before he was drafted with many of them cooling on him once Ole Miss’ former closer left the team in early May, a decision Woolfolk hasn’t discussed publicly in detail until now.

“Basically my heart and mind wasn’t right. I wasn’t able to see the light in the day,” Woolfolk said in an exclusive interview with the EAGLE. “I was basically in a whirlpool of darkness. Just a lot of anxiety. I couldn’t go about my day with a focus or anything.”

With a mid-90s fastball highlighting his repertoire, Woolfolk earned preseason All-America honors entering the season after recording 12 saves as a sophomore, the second-most in program history. But the expectations that came with the breakout season triggered the anxiety he’s dealt with for years.

“If you don’t treat something small, it will lead to bigger things,” Woolfolk said, “and that’s what kind of happened throughout the season.”

Woolfolk also let his weight balloon to more than 250 pounds, the heaviest he’d been in his career. His mechanics suffered, and that power fastball that helped him rack up 41 strikeouts in 37 ⅔ innings the previous season became a shell of its former self, though Woolfolk said the dip in velocity was more a byproduct of the immense mental pressure he put on himself with each uncharacteristic outing.

Woolfolk allowed 18 hits in 14 ⅓ innings as opponents hit .310 against the right-hander — a drastic jump from the .200 average he held hitters to the previous season. He lost the closer role to Parker Caracci by the start of the SEC schedule and made just five appearances in league play, failing to record an out in two of them.

“During the offseason, I worked and worked, and when you get out there and perform not to your maximum potential the way you’d like to, it kind of takes a toll on you. It really sucks,” Woolfolk said. “It just beats you down. Your head starts screaming, and then you can’t get out of being in your head honestly. It just creates chaos.

“Any time I went out there, I was thinking too much even when I played catch. It just wasn’t a good environment that I was in to help myself. I wouldn’t want anybody else to go through it.”

A game he’d enjoyed playing his whole life suddenly became a burden, and Woolfolk felt the mental walls closing in. Two days after facing two batters in his final appearance at South Carolina on May 6, Woolfolk told head coach Mike Bianco he needed to step away.

The school put out a release the next day that included a statement from Woolfolk citing personal health, a vague description that hardly scratched the surface of the negative thoughts that consumed him.

“I wanted to (have fun) and I tried not to show my teammates that I wasn’t,” Woolfolk said. “I tried everything in my willpower to basically put a mask on, but deep down I was not having fun. It was just a terrible time.

“It’s basically like a dark hole and you’re at the bottom trying to climb out. And when you feel like you’re about to get to the top, you fall right back down.”

He said he never contemplated giving up baseball for good. Woolfolk knew he’d likely get his shot at the professional ranks, but taking a break was “the best thing I could’ve ever done for myself” in order to recalibrate on and off the mound.

That included returning to his native Southaven to begin continuous one-hour workouts at least three times a week and fixing his diet as he tried to build muscle and rid himself of bad weight. Woolfolk said he’s down to 245 pounds with a goal of getting under 240.

He also wants to return to a more natural three-quarters arm slot, something he’s worked on with a former pitching coach. Woolfolk said he’s been as open as possible when discussing his situation with A’s personnel and doesn’t want anybody within the organization worrying about his commitment as he tries to rediscover his old form.

“Work as hard as I possibly can and show them how bad I want it,” Woolfolk said. “Go out there, compete, have fun and be relentless every time.”

Some personal changes have him feeling closer to that in all facets of life. His new routine starts with daily scripture reading and often includes listening to Christian music, particularly when he feels a negative thought coming on.

It’s a process for Woolfolk that’s not as dark as it once was.

“Just trying to clear myself of all the distractions and finding myself again,” Woolfolk said. “I found the light in the day, and I can actually see the light in the day. That’s helped out a lot, and I’ve taken that with me, the things I’ve been doing to better myself.

“It doesn’t happen overnight. It takes day by day, not giving up, not giving in and just working mentally and physically. Just finding a routine you know that works, and that’s what I’ve done.”